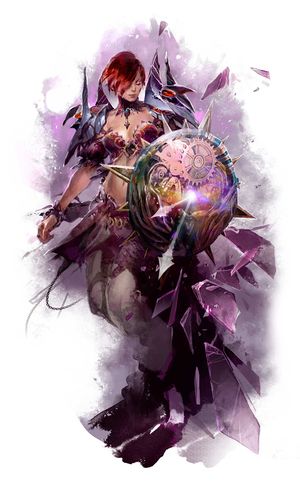 Chronomancers manipulate the battlefield through the use of wells, creating brief ripples in time that give their allies various boons and slowing your enemies. They also have access to the powerful alacrity boon, reducing skill cooldowns.

Chronomancer is an elite specialization for the mesmer unlocked with the Heart of Thorns expansion. Chronomancers have learned to control time itself, unlocking a new shatter skill, Continuum Split, that creates a brief rift in the space-time continuum for the chronomacer to exploit, before shifting to the original timeline with their previous health, endurance, and cooldowns, effectively using skills twice by travelling back in time. Their other shatters are also empowered with double strikes, reduced cooldown, or slowing down the actions of their enemies. Chronomancers have learned well skills, ripples in time that tick down and explode to damage enemies and provide boons to nearby allies, or even manipulate gravity. They can wield shields as their off hand weapon, a defensive choice to block attacks or freeze enemies in time. Chronomancers can support nearby allies with their skills to manipulate time, speeding up their actions with quickness, or improving the recharge of their cooldowns with alacrity; or go all in on the offensive with phantasms that travel back in time to attack twice.

New Chronomancer Shatters are the Chronomancer's profession mechanic. Using a shatter will create a powerful effect by destroying all of your clones.

Those who choose the path of the chronomancer gain new abilities that allow them to rend both space and time. Being able to use both a shield and new wells, their skill set focuses on past versus future and fast versus slow as key themes. Chronomancers also gain access to Continuum Split/Shift, as well as the new alacrity effect that speeds up skill recharges rather than slowing them down.

Chronomancers are mesmers that are able to rend and manipulate the local perception of time and space.[1] Just as the structure of time within the Mists might seem fluid and ineffable to mortal minds, chronomancy has a decidedly mystical bent, as chronomancers traditionally use shields with ancient arcane mechanisms to help them with time manipulation—such mechanisms are clockworks, hourglasses, and celestial bodies. Skilled chronomancers slip nimbly through the flow of time while bringing their enemies to a screeching halt; if the perception of time is an illusion, it’s one that they’re uniquely equipped to both create and shatter.[2]