Armor is equipment that is worn to provide defense against strike damage in combat and to provide attribute bonuses. Armor provides no protection against conditions. Armor is divided into three armor classes, which correspond to the three profession types; scholars wear light armor, adventurers wear medium armor, and soldiers wear heavy armor. Most armor is part of an armor set.

There are six standard slots for armor, covering the head, shoulders, chest, hands, legs, and feet. There are also the aquatic headgear, which replaces headgear when the player enters underwater mode.

Headgear, shoulders and gloves can all be set to be hidden to not display their appearances. 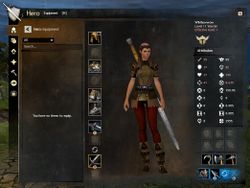 The counterpart to armor sets are non-set armor pieces: these are unique skins (such as Fanatic's Mantle) or slots (such as Aquatic Headgear) which are never found as part of a set.

In addition to defense, armor also provides bonuses to attributes. The value of this bonus depends on the level, slot, and rarity only. Different armor weights do not offer different attribute bonuses like they do defense ratings. The attribute bonuses given depends on the prefix of the armor. Some prefixes have both a major and one or more minor bonuses. Quadruple-attribute armor was introduced with Heart of Thorns, and are available only as level 80 exotic and ascended varieties. Celestial (or nonuple-attribute) armor is also available only as level 80 exotic and ascended, and offers smaller bonuses to nine attributes.

Runes are a type of upgrade component that can only be applied to armor, including aquatic headgear, but not back pieces. Runes have tiered bonuses that increase for each of the same type of rune equipped. Minor runes have two tiers of bonuses, major runes have 4 tiers, and superior runes have six tiers. The bonuses are not only to attributes, but can also have special effects. A limitation of runes is that equipping more runes than the rune has tiers will not give any additional bonuses.