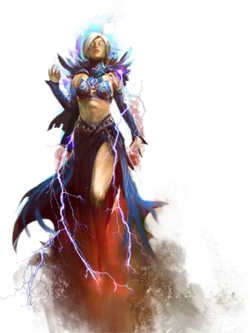 Elementalists are multifaceted spellcasters who channel elemental forces, making fire, air, earth, and water do their bidding. What they lack in physical toughness, they make up for in versatility and the ability to inflict massive damage.

Elementalists are master spell casters. Their profession mechanic is their four attunements: Fire, Water, Air, and Earth. They wield each of these elements to defeat their foes and aid their allies. Albeit lacking in defense, elementalists are very versatile and have access to a plethora of skills, as these change when attuning to the different elements. Elementalists can also manifest the elements as conjured weapons with their own set of skills, or as allied elementals to aid them in combat. As a scholar profession, elementalists wear light armor.

tempests, learning to overload their attunements for powerful effects at the expense of a longer recharge, while imbuing their voices with magic into shouts that aid nearby allies.

weavers, wielding one attunement on one hand and another attunement in the other, and even combine their effects into Dual Attacks. With reduced recharge on attunement swapping, all the new skills from weaving attunements together, and their stances, a master weaver never runs out of spells to cast.

catalysts, who cycle through the attunements to power up their Jade Sphere and manifest the four Canthan Great Celestials to provide boons to allies, while empowering themselves with Augment skills.

The Elementalists have unique power to attune to different elements that changes their weapon skills based on the element.

When one of these attunement skills is activated, the weapon skills of the player change based on the equipped weapon(s) and the chosen element. Because these attunements can be freely swapped even while in combat, effectively giving access to four different weapon skill sets, elementalists do not have access to weapon swapping in combat like most other professions. They also have the lowest base health in comparison to other professions, so they have to make up for their lack of durability under fire by managing their attunements and skills carefully and avoid putting themselves in dangerous situations. They also are very versatile, able to easily adopt a support or damage role.

Tempest — Gain access to warhorns, a set of shout skills, and the ability to overload attunements for powerful effects.

Weaver — Gain access to swords, a set of stance skills, and the ability to wield dual attunements.

Catalyst — Gain access to hammers, a set of augment skills, and the ability to use jade spheres that grant boons to allies.

The elementalist is a scholar profession and wears light armor.

It should be noted that sigils that trigger on weapon swap (like Sigil of Battle), also trigger when the Elementalist swaps attunements.

Access to the weapon swap mechanic when out of combat was added in the December 3, 2019 game update.

The following crafting disciplines can create items that are useful to the elementalist:

In the biography step of character creation, elementalists must decide which of the four elements they prefer the most. This choice is merely cosmetic and determines their starting head armor, which can be hidden or transmuted after character creation.

Elementalism is a broad and versatile field, and under the now-unfashionable "four schools" model of magic, had applications within all four. Likewise, while most other professions have a single human god as their patron, human elementalists tend to worship a variety: pyromancers worship Balthazar, aquamancers kneel before Grenth and Lyssa, aeromancers appeal to Dwayna, and geomancers look to Melandru.