This article is about the elementalist specialization. For the Sanctum Sprint skill, see Tempest (Sanctum Sprint). 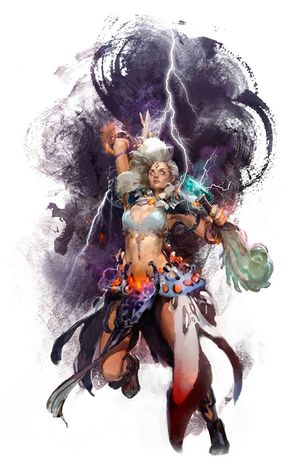 Overload your attunements to become a powerful singularity of elemental power, shouting at your foes and calling upon your allies. The tempest specialization offers superior area-of-effect abilities in exchange for a slower attunement rotation.

Tempest is an elite specialization for the elementalist unlocked with the Heart of Thorns expansion. Tempests have learned to overload their attunements to create powerful area effects at the expense of a longer attunement recharge. They imbue their voices with magic to use shouts that support nearby allies and damage enemies. They can also wield warhorns to command the elements to deal even more area damage, or crowd control, or support. Tempests are naturally supportive, having access to a plethora of boons and heals to empower and aid their allies; but they can also opt into damage to overwhelm their enemies with the power of their overloaded elements.

Overload is a profession mechanic exclusive to tempests that grants additional skills while in each attunement, causing an effect while the tempest channels it and for a short period afterwards. Each overload skill is able to be used after 6 seconds in the attunement. Using the overload causes the attunement to go on recharge. If the remaining overload cooldown time is longer than the normal 10 second attunement change cooldown (including the reduction allowed by Elemental Enchantment), it will be used instead of the normal attunement change cooldown.

Wielding an off-hand warhorn and utilizing shouts, tempests blast out elemental power to support allies at close range and deal constant damage to enemies. Tempests will be able to overload their attunements at the penalty of recharge in order to deliver high-pressure sustained damage, control, and healing to nearby areas.

With the coming of fierce enemies and the Elder Dragons, elementalists reach deep into the elements in order to harness some of the most pure and dangerous aspects of natural magic and even infuse them into sound. While elementalists have mastered the elements of fire, water, air, and earth, tempests look to extend the boundaries, allowing them to overload each element to unleash chaotic and draining abilities that are able to temporarily exhaust the elements.[1][2]