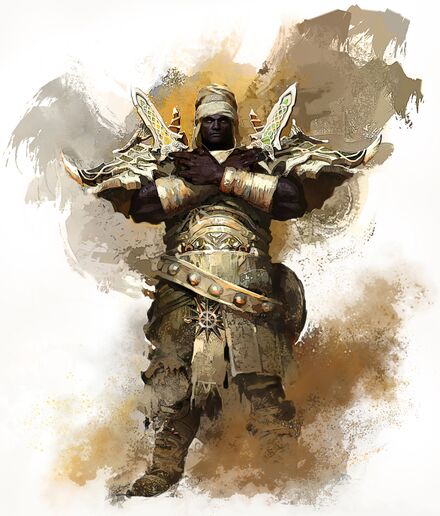 "I counter your magics!"

Act with precision and intent to strike at the very weave of magic to cut down your foe's enchantments while disrupting their ability to cast spells. Utilize the Full Counter skill to absorb attacks and retaliate with devastating force.

Spellbreaker is an elite specialization for the warrior unlocked with the Path of Fire expansion. The original spellbreakers were Elonian Sunspears. Palawa Joko defeated the Sunspears and their symbol, and everyone found wielding a spear would be put to death. The remaining Sunspears broke their spears and reforged their spearheads into daggers. They trained in secrecy and learned how to break magic itself. Spellbreakers sacrifice damage in exchange for control, they have a smaller adrenaline bar and weaker Burst attacks than a traditional warrior but, in exchange, have learned to Full Counter attacks to completely negate their damage and deflect them back to their opponent. Spellbreakers always balance the scale, ensuring all fights are fair by destroying their enemy's boons by striking at the very weave of magic, and inflicting crowd control to interrupt them when casting spells. They have learned meditation skills which focus on balance by removing boons, and steadiness by protecting the spellbreaker. They can wield daggers in both hands for quick movement, attacks, boon removal, and control. Spellbreakers focus on defense and control by absorbing attacks, removing boons, and inflicting crowd control.

I reject your feeble power!

Spellbreakers have a smaller adrenaline bar and can only use Burst skills of level 1 but, in exchange, gain access to Full Counter. This counter absorbs the next attack within 1,5 seconds, reducing its damage to 0, and striking nearby foes in retaliation.

The broken weapons of the Sunspears have become daggers in the hands of their descendants, which they use to strike at the very fabric of magic and strip it from their foes. They meditate to see past their enemies' defenses, and they use their adrenaline to counter attacks.