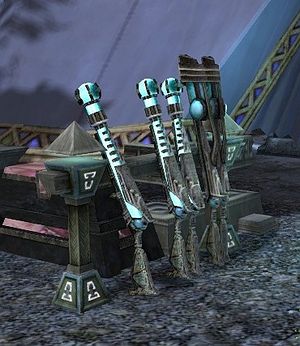 A bundle, also known as an environmental weapon, is a special type of object which, when acquired, provides its own set of skills.

Bundles can usually be found and picked up in the game world, or obtained from NPCs during events. They cannot be stored in your inventory, although some merchants sell consumable items which can be stored, which provide you with a bundle when used, such as the underwater net.

Examples of bundles include eggs that provide beneficial effects or can be thrown at enemies, buckets of water picked up and used to douse a fire or awaken a drunkard, Wooden Planks, tree branches or broken and empty bottles used as weapons or to stun or launch an enemy. Asura inventors all over Tyria also frequently invite adventurers to test their experimental weapons during events. Some weapons, like the Frying Pan, provide entertaining effects, and many provide a way to experience a specific real skill or effect which may not be available to your profession, such as leaping, stunning, knocking back or throwing a net at an enemy.

When picked up or otherwise obtained, a bundle replaces the currently equipped weapon's skills with its own set of skills, without actually replacing the weapon itself in the hero panel. Your weapon will become unusable until you either swap weapons or drop the bundle, but you will continue to benefit from any bonuses your equipped weapons provide.

Most bundles have usage limitations such as being usable only once or having a limited lifetime, disappearing if you wander out of the area where they are meant to be used or having a chance of breaking when their skills are activated. Swimming with a bundle equipped will usually cause it to be lost, though gliding with a bundle will not cause the bundle to be lost as bundles cannot be dropped while in air. In most cases, dropping a bundle using its dedicated skill or swapping weapons will destroy it, although some weapons are static and will remain on the ground when dropped or when being downed.

Certain bundles (like Affinity Analyzer) block the profession mechanic, rendering slot skills tied to it useless or limited compared to their original function.

Bundles are available to some professions as part of their regular skills or profession mechanic: