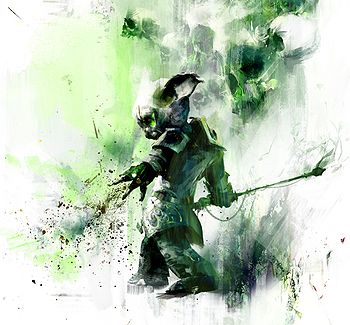 Practitioners of the dark arts, necromancers summon minions, wield the power of ritual, and heal themselves with blood magic. Necromancers feed on life force, which they can leverage offensively or use to delay their own demise.

Necromancers are masters of the dark arts. They absorb life force from nearby deaths to fuel their profession mechanic, Death Shroud, where they endure incoming attacks while striking their enemies, ensuring they always outlive their foes. Necromancers command over death itself, they can summon undead minions to fight for them, overwhelm their enemies in conditions, corrupt their boons, drink their blood, rip their skin and soul, and steal their life. As a scholar profession, necromancers wear light armor.

reapers, unrelenting harvesters who slice their enemies' souls and bodies with their scythe and Reaper's Shroud.

scourges, wielding the desert sand to afflict their enemies and shield their allies with their sand shades and Desert Shroud.

harbingers, dark alchemists that afflict themselves to increase their power, throw elixirs to empower their allies and fire piercing corrosive shots from their Harbinger Shroud.

Necromancers' profession mechanic is Death Shroud. They gather and store Life Force from nearby deaths and then use it to fuel their Death Shroud, which gives them access to a different set of skills and replaces their health with their life force. 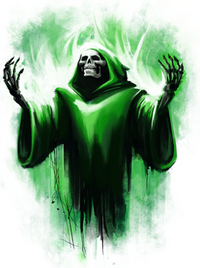 Spite — Focuses on improving power damage, might generation, and applying vulnerability on enemies. May enhance focus, axe, and signet skills.

Death Magic — Focuses on defence by granting toughness and protection against conditions. May enhance minions.

Harbinger — Versatile specialization, possessing powerful potential, at the cost of their own life due to Blight. Gives access to a mainhand pistol, Elixirs for boons, and replaces Death Shroud with the more offensive Harbinger Shroud.

The necromancer is a scholar profession and wears light armor.

The following crafting disciplines can create items that are useful to the necromancer:

In the biography step of character creation, necromancers must decide what they would mark their face with. This choice is merely cosmetic and determines their starting head armor, which can be hidden or transmuted after character creation.

Amongst human necromancers, Grenth is often worshipped as their patron god. While norn necromancers often revere Raven over the other Spirits of the Wild.