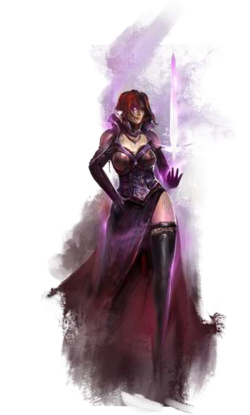 Mesmers are magical duelists who wield deception as a weapon. Using powerful illusions, clones, and phantasmal magic to ensure that their enemies can’t believe their own eyes, mesmers tip the balance of every fight in their favor.

Mesmers are masters of deception and misdirection. Their profession mechanic is Illusions, ethereal creations that look like the mesmer employed to both fool their enemies and attack them. Mesmers then shatter their illusions in the blink of an eye to annihilate their dumbfounded enemies. As a scholar profession, mesmers wear light armor.

chronomancers, empowering their shatters and gaining control over time itself to slow and wind down foes and speed up allies, and even travel back in time.

mirages, extremely elusive duelists who blend with their clones while cloaking in the desert sands to dodge attacks while striking, ambushing, and creating deceptions.

virtuosos, foregoing their clones to manifest sharp psionic skills and blades to pierce and rain over their enemies.

As masters of misdirection, mesmers create Illusions to help them in combat. They come in two types: Phantasms and clones.

Mesmers are capable of shattering their clones at will for various effects.

Mesmers also enjoy a wide variety of skills which allow them to avoid attacks, either by blocking and counterattacking, evasion, or by using stealth magic.

Mesmers are adept at inflicting confusion on their enemies — a condition which causes the mesmer's enemies to take damage each time they use a skill and stacks in intensity.

Dueling — Focuses on critical hits. May increase the mesmer's elusiveness, and enhance pistol and sword skills.

Chaos — Focuses on defense, gaining boons, improving the effects of regeneration, and increasing boon duration and condition duration. May enhance staff and trident, and manipulation skills.

Chronomancer — Focuses on time control through alacrity, quickness, and slow. Gives access to shield, well skills, and replaces Shatter skills with Chronomancer shatters, including Continuum Split, enabling the chronomancer to travel back in time.

Mirage — Focuses on condition damage and elusiveness. Gives access to mainhand axe, deception skills, and replaces dodge with access to Mirage Cloak, during which ambush skills may be used.

The mesmer is a scholar profession and wears light armor.

See also detailed list of mesmer weapon skills. Each of the Mesmer's two-handed or offhand weapons have access to a phantasm.

There are twelve possible weapon sets for this profession and two while underwater. The mesmer can switch between two weapon sets while in combat.

The following crafting disciplines can create items that are useful to the mesmer:

In the biography step of character creation, mesmers must decide the mask that they wear. This choice is merely cosmetic and determines their starting head armor, which can be hidden or transmuted after character creation.

Mesmer magic draws on chaos magic[1], and historically, within the now-unfashionable "four schools" model of magic, focused on the school of Denial.[2] Mesmers pride themselves on their ability to inspire, and work hard to engender trust in those who might be suspicious of their illusions, even if they have to use deceptions to do so.[3] To this end, the mesmer community is highly secretive, and they rarely share knowledge of their more powerful abilities—such as creating illusions in the mind of a single target—with outsiders.[4]

Mesmers routinely cast convincing illusions, including clones of themselves and phantasms, some of which have substance, so their magic is more than just tricking people’s minds, as they have a substantial mental power at their command.[3] However, they do have control over what people see or how they see it, so that things that aren’t really there seem to be, and things that are really there seem not to be, as mesmers are manipulating the fabric of reality—this control is limited by their power and experience in casting illusions.[5][3] Instead of a pure mind control, however, most mesmers use spells to create something like a post-hypnotic suggestion rather than turning a sentient being into their puppet. The most powerful mesmers might be able to exert a genuine mind control, but if they can, they are keeping it a secret to prevent the creation of countermeasures. [5] The Mesmer Collective is an invite-only organization of unknown purpose.

Amongst human mesmers, Lyssa is often worshipped as their matron goddess.[6] The decline of humanity and the rise of other races have affected the weaponry used by mesmers, with norn introducing greatswords and charr introducing pistols.[2]