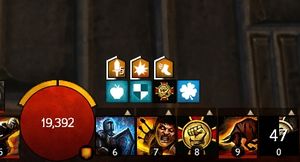 Active effects can be seen to the right of the health orb above right side of the skill bar.

Effect refers to any kind of status that alters the state and standard characteristics of characters or NPCs. Active effects on characters can be seen in the effects monitor, directly to the right of the health orb. When a target is selected, active effects on that target can be seen underneath their health bar. Most effects are temporary; however, certain NPCs can possess permanent effects such as invulnerability or unshakable.

While many effects are unique and limited to a couple sources or NPCs, there are some common effects seen in the game. There are four primary groups of effects that play an integral role in combat: