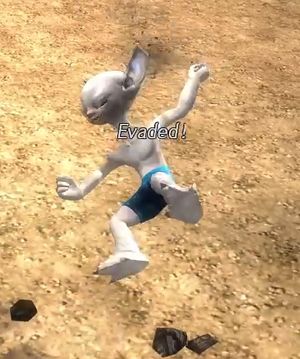 An in-game screenshot of evading an attack.

Evade is mechanic which prevents attacks (including many Area of Effect attacks and traps) from hitting a character for a short duration. Evading can be achieved by a carefully timed dodge an instant before the blow lands, but can also be achieved using some skills or effects. In both cases, the word Evaded! appears on the screen in white text when you successfully evade an attack.

For the skills that grant evasion, the duration of the evasion window is shown in the skill's tooltip – typically around 0.75¾ seconds, approximately the time of a dodge. This is the time, after activating the skill, during which you will evade all attacks which would have hit you otherwise.

The attacker will see an Evaded! message on their screen in red text, and the failed attempt may still count as an attack for traits and skills which affect a certain number of attacks, such as Spider Venom.

Skills that allow evading will either cause quick retreat by a backwards roll or flanking by quickly positioning the character to the side or behind an enemy. Being immobilized does not prevent the evading of attacks, but it does prevent dodging and movement in general, except for teleportation.

Dodge, or use an evasion skill, just before being hit (taking into account the activation delay of the skill.)

To successfully time an evasion, you need to predict the instant at which the attack will hit you (given knowledge of the attacker's skill animation, weapon swing or projectile speed, etc.) The "Evade" duration listed on your evasion skill is the time during which you have to activate the skill before you expect the hit to land. The shorter that time, the longer you must wait until the hit has almost landed, before dodging or activating the skill. Needless to say, practice makes perfect.

The following is true for evading caused by dodging as well as by the use of skills: