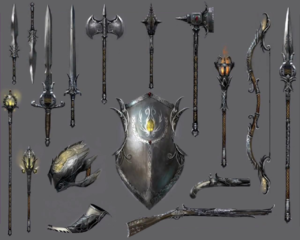 All weapons have a range of weapon strength which, in combination with Power and the opponent's armor, affects the strike damage dealt with that weapon's skills. In addition, a weapon can provide up to 4 attribute bonuses (there are also items that provide small bonuses for 7 attributes) based on its prefix, and often includes a slot for an upgrade component. The amount of weapon strength and attribute bonuses depend on the weapon's required level and quality. Weapon strength is always the same for a given weapon type at a particular level and quality (for example, all masterwork shields with a level requirement of 35 have 279-314 weapon strength), but damage might still vary depending on which attributes the weapon improves (e.g. a weapon that improves power will end up dealing more damage than a weapon that improves toughness).