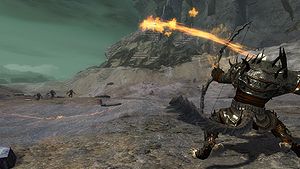 The area of effect of this bow skill is marked on the ground.

A skill is an ability which is activated by the player to perform an action. It is through skills that a character is able to do damage, protect themselves and their allies, and perform actions with objects in the environment. Skill selection is one of the most significant ways a player can customize how their character plays.

Skills are picked through a choice of weapon and unlocking and selecting slot skills into the skill bar. Skills are automatically improved as the player gains levels, and manually by increasing attributes and selecting traits. Types of skills available to a character are determined primarily by its profession with a few racial skills and a very few global special skills.

A summary of all weapon skills can be displayed in the Hero panel.

Weapons give different skills depending on which slot they occupy:

Weapons in the offhand define the fourth and fifth weapon skills.

Each skill has a separate cooldown, swapping to a weapon of the same type will not reset skill cooldowns. Weapon skill cooldown timers continue to tick down even if the weapon is not currently equipped, stowed, or swapped out for the other weapon set. 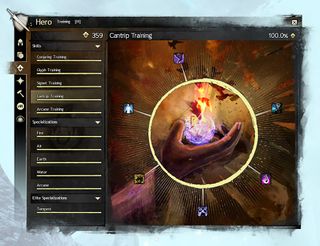 An Example of what the training panel looks like.

Healing, utility, and Elite skills — collectively, slot skills — are available for selection by the player to complement a character's weapon skills. These skills use slots 6 - 10 on the skill bar: slot 6 for healing skills, slot 10 for elite skills, and the others for utility skills. New characters only have slot 6 unlocked; the remaining slots unlock in sequence as the character reaches levels 11, 15, 19, and 31.

Slot skills must be purchased with hero points gained from leveling up (earned every odd level from 11 to 80) or via completion of hero challenges scattered throughout the game in PvE and WvW environments. The skill costs are outlined in the tables below.

Weapon skills are automatically selected upon equipping a different weapon. Slot skills are selected by the player out of combat. All skills may automatically change (or be suppressed) when switching attunement, entering water or using a bundle.

A skill is activated by clicking, using its icon in the skill bar, or by the keyboard using the number bound to the skill bar slot. Some skills require an extra click to target an area of effect. Skills can be activated in towns and outposts. Movement can terminate activation or full activation, but most skills allow the character to move freely. The user can select a skill to use as an auto-attack by Ctrl right-clicking it. Some skills have an activation cost, such as adrenaline, initiative or life force. Skills with activation time can be interrupted preventing the effect and recharge.

Mousing over a skill icon in the user interface reveals a tool tip that describes what the skill does when it is activated. The information displayed in the tip is updated as the character improves their attributes and choose traits which modify the skill's behavior and indicates the maximum damage from using the skill without hit modifications, such as critical hits and skill combos. Some skill effects and range can also be identified by the colors and icons on the skill bar. If necessary, skills can have different effects in PvE and PvP versions or be disallowed from PvP play to maintain balance.[1]

Once the skill is successfully activated hit and miss mechanics come into play. These depend on range, level and body position of the target, obstructions, interactions with other skills and the actions of the target, among other things. Skill effects can combine to create combos. The details of skill damage and the effects of these factors are covered in detail in the article on damage.

A skill with an area of effect has the area marked on the ground. Friendly skills are marked in white, combo fields that do not need to be triggered have a higher contour, and skills which will harm the player are marked in red. Area of effect attacks, buffs, and heals are usually applied to up to five targets in the area.

Once the activation is complete a skill will enter a recharge time before it may be used again. A skill cannot be swapped until its recharge is complete.

Skills with similar behaviors are grouped into types. Many traits affect all skills of a certain type.

Besides their skill types, skills can also have a specified type of activation. For example, Symbol of Protection is a hammer chain symbol.