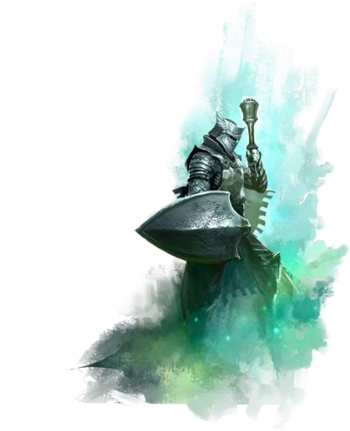 Guardians are devoted fighters who protect their allies and smite their enemies by drawing from the power of their virtues. True guardians are brilliant tacticians and selfless defenders who know how to empower their allies to achieve victory.

Guardians are devoted combatants. Their profession mechanic is their virtues, which passively provide benefits to the guardian, and can be activated to lose the passive bonus temporarily and provide a more powerful effect to nearby allies. Guardians act with conviction when smiting their foes and supporting their allies with their unshakeable faith. As a Soldier profession, guardians wear heavy armor.

dragonhunters, empowering their virtues for more tangible benefits while laying traps for their enemies.

firebrands, protectors of knowledge and lore who manifest their virtues as sacred tomes of knowledge to burn their foes and heal and protect their allies while they chant mantras to empower friend and weaken foe.

willbenders to manifest their virtues as mobility skills. These fast and agile combatants are always on the move, striking their enemies before they can react and favoring a more physical solution to their problems.

The Guardians' most notable unique abilities are their Virtues. These provide passive effects to the guardian and, when activated, provide various effects for nearby allies as well. Guardians have three distinct virtues, which can be further augmented for more powerful effects through the use of traits.

The guardian has a reputation for being the most durable profession in the game—despite their lower initial vitality—due to their virtues and many utility and elite skills that focus on the application of boons, pro-active defense and protection of allies in general.

Virtues have been said to help balance the guardian. For example, they have a lower base health than the Warrior profession, but compensate for this with a higher health regeneration (granted by Virtue of Resolve).[1]

Radiance — Focuses on burning, critical hits and resolution; based on Virtue of Justice. Enhances sword, torch and signet skills.

Valor — Focuses on blocking and toughness; based on Virtue of Courage. Enhances focus, shield and meditation skills.

Honor — Focuses on dodging, healing and protection; based on Virtue of Resolve. Enhances mace, staff, symbol and shout skills.

Dragonhunter — Grants access to the longbow and a set of trap skills, and replaces active virtues with ones that manifest in a physical form.

Firebrand — Grants access to axes and a set of mantra skills, while replacing active virtues with Tomes.

Willbender — Grants access to off-hand swords and a set of physical skills, and replaces virtues with ones that have no passive effect but provide movement abilities when activated.

The guardian is a soldier profession and thus wears heavy armor.

The following crafting disciplines can create items that are useful to the guardian:

In the biography step of character creation, guardians must decide which article of clothing they will wear to show their dedication. This choice is merely cosmetic and determines their starting shoulder or head armor, which can be hidden or transmuted after character creation.

The guardian is one of the newer professions in Tyria, having evolved from a mixture of older, mainly human traditions; in particular, the heavily-armored, supportive paragons of Elona[2] and the deeply religious monks, who would often appeal to the human gods Dwayna and Balthazar for the magical fortitude to heal and protect their allies and smite enemies. Today, guardians can be found amongst all races, and as a result many have moved away from this religious approach, wielding their magic in a more immediate, pragmatic manner than spellcasters.[2]