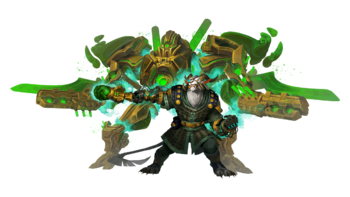 The mechanist is an innovator and master of jade tech, battling alongside a mech of their own creation. Customize your mech and use it to crush your enemies—together, you're unstoppable.

Mechanist is an elite specialization for the engineer unlocked with the End of Dragons expansion. The advances in Canthan technology and the capacity for storing energy of the Dragonjade have been the cornerstone for the mechanists' cutting-edge Jade Mech CJ-1, their very own battle bot. They replace their tool belt with Mech Command skills to control their mechs. Mechanists have learned signet skills, which augment both themselves and their mech, and can be consumed for greater effects. They can wield maces in their main hand for both damage and support. Their mechs are highly customisable, gaining different abilities based on the mechanists choice of traits. This makes mechanists very versatile, letting them specialise into damage dealing, or support, providing boons and healing.

The wonders of jade technology permeate daily life in Cantha. Fusing these new schools of thought with the mechanical techniques and knowledge from the rest of Tyria presents a unique opportunity for a widely traveled engineer. Taimi will be jealous. The mechanist is a dynamic innovator, using their mechanical expertise and advanced Canthan technology to battle alongside a jade mech of their own creation. Customize your mech and use it to crush your enemies—together, you're unstoppable.