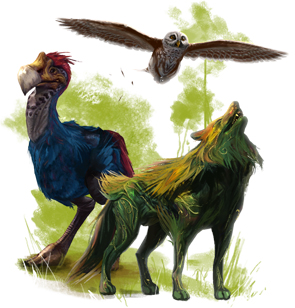 Pets are the NPC allies that constitute the ranger's profession mechanic. Rangers and their pets fight as a team, and are always together. There are currently 50 pets in the game. They can be classified by their family, such as birds, canines, moas, bears, jellyfish, etc; and also the environment in which they can live: land, aquatic, or both (amphibious pets).

By default, pets attack the same target as the ranger, or whichever enemy is attacking the ranger, but can be commanded to attack whatever target the ranger wants. If the ranger moves too far away, the pet will stop fighting and return to them. If the ranger is in the downed state, they can still use their pet to help in rallying them by finishing off the enemy or by having the pet revive them. 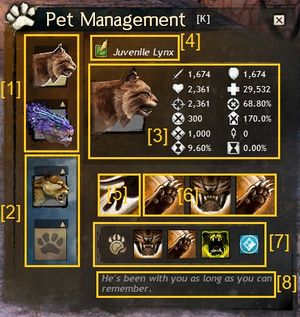 New rangers venture into Tyria with one single pet. During character creation, rangers must choose one from among three pets to start the game with. The choice of pet depends on the player's race. For example, a norn can choose as their first pet a Juvenile Snow Leopard, a Juvenile Brown Bear, or a Juvenile Alpine Wolf; whereas a sylvari has to choose between a Juvenile Blue Moa, a Juvenile Jungle Stalker, or a Juvenile Fern Hound. Nevertheless, this choice only determines the ranger's first pet.

A key feature of the pet profession mechanic is the Pet Management panel, which can be accessed by clicking the current pet's portrait above the ranger's skill bar, or by using a shortcut key, which defaults to K. Once a pet is tamed, they will join the ranger and appear in the Pet Management panel, where rangers can choose to have that pet aid them in battle. In this menu, rangers can view the attributes and skills of their current pet. Each pet has three attacks (more on this below), and a unique Beast skill. They can also see the location where they tamed the pet. There is also information relevant only to

soulbeasts: the pet's Archetype, and the Beastmode skills; this information is not relevant at all for

Through the Pet Management panel, rangers can also rename their pets. To rename a pet, a ranger has to be using that pet, open the Pet Management panel, then click on the quill icon to the left of the pet's name. Rangers have to be underwater to rename their aquatic pets and view their attributes and skills. Only the pet the ranger is currently using can be renamed, but pets will keep their name forever, or until their name is changed again.

Through the Pet Management panel, rangers can also view all the pets that exist in the game, and select from among that pool which pets —that they have already found in the world and tamed— will help them in combat. Rangers can slot four pets in this panel, the two upper slots are used for terrestrial pets, and the two lower ones for aquatic pets. Amphibious pets, such as drakes, can be placed in any of the four slots. A ranger can only tame each pet once, and should choose before entering combat which two pets they would like to use: two pets for terrestrial combat, and two pets for aquatic combat, with only one pet active at any given time. Therefore, rangers cannot have, for example, two Juvenile Polar Bears; but they can have and use two bears if they are different, such as a Juvenile Polar Bear and a Juvenile Brown Bear.

There are four pets that are cosmetic-only achievement rewards intended for players of the original Guild Wars; they can only be obtained through the Hall of Monuments: three land pets, the Juvenile Black Widow Spider, the Juvenile White Raven, and the Juvenile Black Moa; and one aquatic pet, the Juvenile Rainbow Jellyfish. They are copies of other similar pets in terms of functionality, but with a different appearance.

Pets have a set of attributes very similar to characters. Main attributes scale with the pet's level, while secondary attributes are static but can be increased through traits.

These pet attributes do not scale with the ranger's own attributes, although several ranger traits can enhance some of them. A pet's level is always the same as the ranger's and their attributes scale with their level. The attributes of pets are shared by all pets in that family (see the taxonomy section), this means that all bears have the exact same vitality, toughness, power, etc. 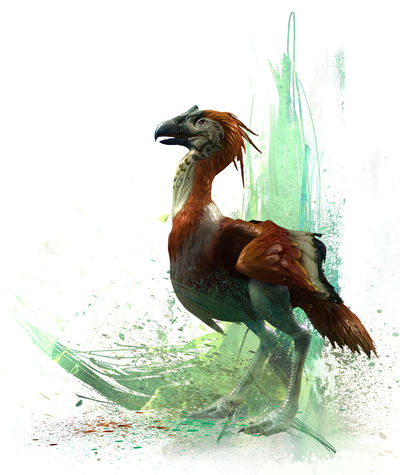 Damage received by pets from most ground AoE attacks from PvE enemies is reduced by 95%, and they are immune to environmental hazards such as lava. This behavior is shared by ranger spirits and most summons in the game.

Downed (pet). However, pet's downed state is very different from player's downed state. A downed pet will not drop on the floor. Instead, they become completely invulnerable, lose all aggro, generate no aggro, get all boons and conditions removed, cannot receive new boons and conditions, and limp back to the ranger. The pet cannot be healed by any means while downed.

Soulbeasts cannot swap pets during combat at all. Instead, entering and leaving the beastmode with your pet now counts as a pet swap for the purposes of skills and traits. 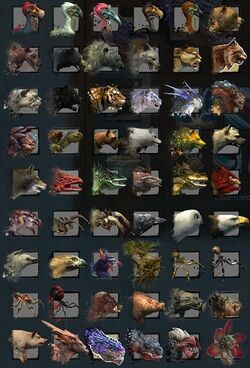 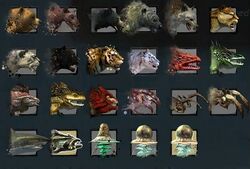