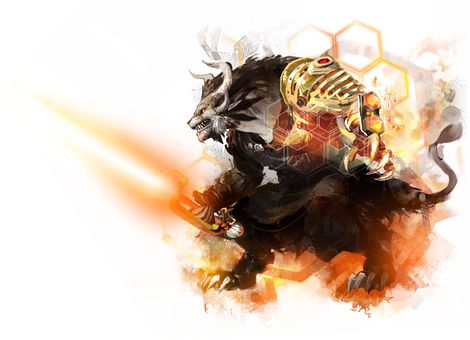 Use your Photon Forge to generate weapons of pure, blinding light, cauterizing your enemies—but be careful not to use these weapons for too long, or you'll overheat.

Holosmith is an elite specialization for the engineer unlocked with the Path of Fire expansion. Holosmiths have learned to use zephyrite crystals to construct their Photon Forge, a device capable of turning the light of the sun into weapons of hard light to cauterize their enemies. The Photon Forge heats up with use, becoming even more effective. But reckless use will end in overheat, which damages the holosmith and prevents the usage of the Photon Forge until it cools down. They have learned to use that heat into exceed skills, which become more powerful at higher heat levels. They can wield a sword in their main hand, which they also imbue with hard light for greater effectiveness when heated up. Holosmiths excel at damage dealing.

By harnessing the power of the sun, holosmiths can create semi-solid constructs of light. They wield swords in battle, and gain access to powerful light weapons in their volatile Photon Forge mode.