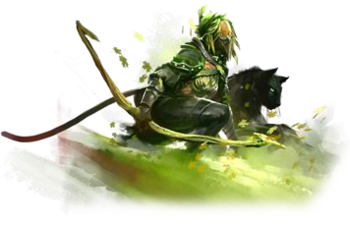 Rangers rely on a keen eye, a steady hand, and the power of nature itself. Unparalleled survivalists with traps, nature spirits, and a stable of loyal pets at their command, rangers can adapt to any situation.

Rangers are defenders of nature. Their profession mechanic is their loyal pets, animal companions that rangers tame and train. Rangers and their pets fight as one, wielding the power of nature to empower their allies, enduring combat with their wilderness survival skills, concealing traps anticipating fights, and overwhelming their enemies with the strength of the pack. As an adventurer profession, rangers wear medium armor.

druids, communing with nature and the stars to channel astral force and become Celestial Avatars to heal and empower their allies and learn glyph skills.

soulbeasts, literally becoming one with their pets in Beastmode, overwhelming their enemies with the combined force of their merged attacks, and adopting animal stances.

untameds and gain more control over their pets. They wield cantrips and the raw power of nature, juggling this primal force between their pets and themselves to unleash their pet or unleash themselves to access their full power and crush their enemies.

The pet is the ranger's profession mechanic. NPCs that fight alongside the ranger, with their own user interface that can set basic behavior modes and activate a skill. Four pets in total can accompany the ranger (two for fighting on land, two for aquatic), but only one pet will fight at a time. Rangers can switch pets during a fight to adapt to in-game situations.

Pets have 4 skills; three shared by all pets in the same family of animals, one which is unique to that species of pet (e.g. polar bear or brown bear).

Marksmanship — Focuses on power damage and starting fights with burst damage. May enhance longbow and harpoon gun, and signet skills.

Skirmishing — Focuses on critical hits for both power and condition damage, and enhances weapon swapping. May enhance sword, short bow, and trap skills.

Wilderness Survival — Focuses on defence, protection from conditions, and inflicting conditions. May enhance torch and dagger, and survival skills.

Nature Magic — Focuses on support through healing and boon generation. May enhance warhorn and spirit skills.

Beastmastery — Focuses on improving your pets, their beast skill, and pet swapping. May enhance greatsword, axe, and command skills.

Druid — Focuses on support, gives access to staff, glyph skills, and the ability to transform into a Celestial Avatar.

Soulbeast — Focuses on merging with your pet, gives access to main hand dagger, stance skills, and the ability to enter Beastmode.

The ranger is an adventurer profession and wears medium armor.

Rangers can craft items useful to themselves with the following disciplines:

In the biography step of character creation, rangers must choose one of three pets with which to begin the game. As rangers venture into the world, they will find all these and other pets for them to tame.

Amongst human rangers, Melandru is often worshipped as their matron goddess.