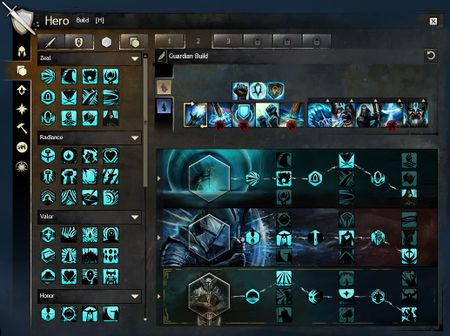 The trait interface of a guardian, with all specialization slots used.

This article is about Traits as an in-game mechanic. For a list of available traits, see List of traits.

Traits are now unlocked. Spending hero points in specializations earns you traits. Once unlocked, you can select them in the build tab for your specialization.

The trait interface is accessed through the Hero panel, in the Traits section of the Builds tab. Traits cannot be assigned until they are unlocked by spending Hero points earned either through leveling or performing hero challenges.

Essentially, each profession has access to five core specializations, and three elite specializations. Slot-wise there are two types of traits: minor and major - three predetermined minor traits which cannot be unselected, and three major traits per tier, one of which can be selected and used. Traits are grouped into three tiers: adept, master, and grandmaster, and are unlocked sequentially by spending hero points in the Training Panel. Traits become available for use after slotting the appropriate specialization in the Specializations Panel.

Players commonly refer to the traits in their build by assigning a number (1, 2, or 3) to each Major trait. For example, the Guardian build shown in the image at the top of this page could be described as: Zeal 213, Honor 223, Virtues 123. Some players add dashes, slashes, etc, in between the numbers, ie. Zeal 2-1-3 or 2/1/3.

Three specializations can be active at any one time. When a specialization is selected up to three of the unlocked traits can be selected, one per tier.

Each specialization has access to 9 major traits, split across the three tiers with three major traits per tier.

In order to use a major trait, it must be selected in an open major trait slot.

Traits can be unlocked in the Core specialization section of the Training tab by spending Hero points gained through leveling. Each specialization consists of 3 minor traits and 9 major traits. To fully unlock all 12 traits costs 60 hero points. Every new tier has an increased cost of Hero points, starting at 2 for the first minor trait and ending at 8 for the last major trait.