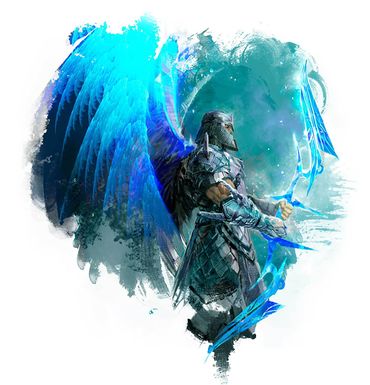 "I will set my trap and wait for them to come."

The dragon hunter is a ranged, methodical hunter that uses various traps to ensnare their prey while picking them off with arrows of light. Their virtue skills become corporeal and more powerful in exchange for a longer casting time.

Dragonhunter is an elite specialization for the guardian unlocked with the Heart of Thorns expansion. Dragonhunters give physical form to the traditional guardian virtues, making them more powerful in exchange for a short casting time. Instead of healing and buffing, dragonhunters prefer to aid their allies by killing their common enemies with their great burst damage. They can use trap skills to deal area damage and deter, or even prevent, enemies from walking out. Dragonhunters can wield longbows, sacrificing area damage for long range single target burst and control. They excel at damage dealing.

As dragons continue stirring in the land of Tyria, guardians have been honing their light into a physical nature, sharp and deadly enough to pierce scales. The dragonhunter specialization will look to viciously purge the lands of dragons and their ilk, with longbow and traps now at hand. As their prowess with light has increased, they are able to physically manifest their virtues into the world.

Dragonhunters are determined to wipe out the Elder Dragons’ threat entirely, including their minions and everything tainted by them. As the dragons’ influence spreads, these guardians have become less trusting and are relentless in eradicating their prey.[1] With all of the changes to Tyria, dragonhunters have learned to better control their abilities in the fight against Mordremoth and their powers in light-wielding have deepened to the point that they can better physically manifest objects such as traps into the world and use them against their foes.[2]