You are downed. Fight to survive. — In-game description

You are downed. Fight to survive.

A character enters downed mode when their health drops below zero. Weakened, but not yet defeated, a downed character may continue fighting with a special set of downed skills—and might rally to regain their life. 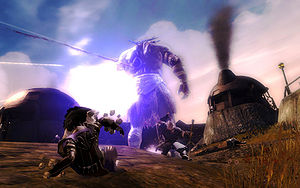 Guild Wars 2 has three separate life states: alive, downed, and defeated. When a character is downed, they fall to the ground and lose their movement but gain triple their base health and a chance to fight to survive. The character's weapons and skills are replaced with downed skills for their profession. (A downed ranger gets the ranger profession's downed skills.) Downed characters cannot dodge, nor can they move or evade attacks unless their downed skills enable them to do so. Health while downed steadily drains at a rate of 2.5% per second and suffers enemy damage as normal.

When a character loses all of their downed health, they become defeated and lose all their available actions. A defeated character may wait to be revived or teleport to the waypoint of their choice.

Being downed is accompanied by visual and audio effects like screen fading, blood-tinted vision, and bass dampened sound.

Drowning is the state of being downed while underwater, with some differences:

Each profession has three specific downed skills and a recovery skill common to all professions called Bandage. The first skill is a damaging skill inflicting either direct damage or conditions. The second skill is a defense skill based on profession, with examples like the warrior's Hammer Toss or elementalist's Vapor Form. The third skill becomes available after a cooldown period and offers special utility—for instance, a warrior can use Vengeance to fight normally for a short time while an elementalist can use Grasping Earth to immobilize and damage a foe.

The fourth skill, Bandage, allows the player to channel a healing effect. Using another skill or suffering direct damage will interrupt the heal and place the ability on a short cooldown.

In PvE mode, training the Spectral Aid mastery gives access to a fifth downed skill: Channeled Agony. Spectral Aid is not available in raids, World vs World, or PvP.

You now enter a downed state when your health reaches zero. Press 1 to fight for your life, or press 4 to mend yourself. Afterward, your health is lower for a while, so be careful.

Defeating an enemy or another player rallies the character, instantly reviving them from downed state. (See:kill effect. Killing an ambient creature will not rally a player.) Healing to full health, such as from the Bandage skill, will also revive the character. Other players can rapidly heal a downed character with the revive skill. To revive a downed character, move next to them and press the interact key (default: 'F'). Any form of control effects interrupt revive attempts unless countered by stability. Note that players can revive both downed and fully defeated characters. Whether from defeated or downed state, characters revive with 25% health.

Leveling up by any means also rallies the player.

In World vs World and Structured PvP, downed enemy players can be finished for an immediate kill. When near a downed enemy, the game displays the message, "Finish them! [F]". Pressing the interact key (default: 'F') begins the finishing action which takes about 3 seconds to execute. Moving or being disabled will interrupt this action, but taking damage will not.

The channel time of "Finish them!" does not change with the quickness boon or the slow condition.