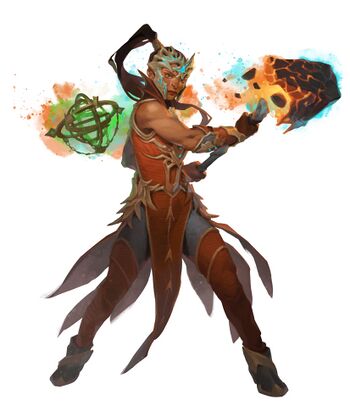 "My power shapes and bends the world."

Catalyst is an elite specialization for the elementalist unlocked with the End of Dragons expansion. Catalysts were once the protectors of the Canthan Empire of the Dragon, the front lines of their armies. Now, they upgrade their traditions with Dragonjade to create their Jade Spheres: reservoirs of magic charged up through spellcasting that catalysts can tap into to summon manifestations of the Canthan Great Celestials to both damage enemies and provide boons to allies. They learn augment skills to temporarily empower themselves with elemental forces, reducing the recharge of these skills if cast inside a Jade Sphere channelling that same element. Catalysts can wield hammers, a heavy weapon that allows them to literally whirl the elements around them for passive bonuses, and then fire these elemental forces at their enemies while striking with this blunt weapon. Thanks to their Jade Sphere, catalysts are capable of empowering their allies with powerful boons, or go all in on the offensive.

A brilliant ember! A swift stream! A thousand storms! An ancient mountain!

The Jade Sphere can be summoned in an area, creating a combo field and granting boons to allies in its radius based on the catalyst's attunement at deployment. Deploying a sphere requires 10 energy, which builds up through damage. Each time you do damage you gain one energy, skills hitting multiple times or multiple foes will provide energy for each hit. You can hold a maximum of 30 energy, which you do not lose between combats.

Catalysts were casters from a bygone era, working to protect Cantha and the throne from enemy threats. They wielded intricate apparatuses called spheres that were used as conduits to channel their immense power. This technology has been revitalized once again—with a couple improvements! Catalysts imbue ancient magics into their jade tech spheres, calling upon imagery from all over Tyria to concentrate into a powerful burst of elemental energy. Whether they're calling upon the swell of an ocean storm or a fiery beast flying through the canopies of Echovald Forest, the catalyst's strength is as strong as their will.