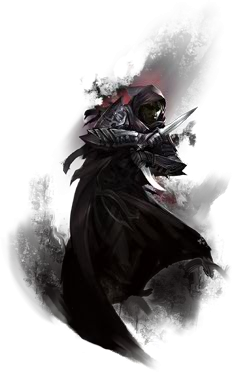 This article is about the Thief profession. For the summoned Thief ally, see Thief (summon).

Experts at stealth and surprise, thieves move through the shadows, vanish into thin air, or steal items from their opponents and use them as weapons. Thieves practice an agile, acrobatic fighting style, which makes them very hard to hit.

Thieves are masters of shadows and assassination. Their profession mechanics are Steal and initiative. With Steal, thieves teleport to their target and create a makeshift weapon inspired by that enemy to gain the upper hand. Initiative, on the other hand, makes their weapon skills have no recharge whatsoever and instead each skill costs a certain amount of initiative to cast. Thieves are elusive and hard to catch, teleporting through the shadows by shadowstepping. They are experts in stealth, becoming fully invisible to then surprise their enemies with a powerful Stealth Attack unique to each of their weapons. As an adventurer profession, thieves wear medium armor.

daredevils, acrobatic combatants that dance over their enemies heads, preferring a more physical solution to their problems, and modifying their dodge roll to further empower their damage or mobility.

deadeyes, lethal duelists with cantrips who mark one enemy for death with Deadeye's Mark, building malice with their attacks, before entering stealth and consuming their malice to unleash a devastating Stealth Attack.

specters, deepening their knowledge of shadow magic to cast wells and enter Shadow Shroud, drowning their enemies in shadows while linking their own souls with an ally's soul to empower each other.

Thieves have the ability to steal an item from an enemy that they can use as a bundle. In terms of game mechanics, the thief does not literally steal an item, but instead creates a bundle based on the targeted creature's classification that the thief can store for later use. The stolen item will be taken from a pool of several possible items for each creature classification, including opposing players in PvP.

The thief's weapon skills have no recharge time; instead they use initiative. This resource allows the thief to use attacks back-to-back and more quickly in a unique pattern. The downside of initiative is being unable to use weapon skills while waiting for initiative to regenerate over time. Thieves also have their own special weapon skill types; Dual Wield skills, Venoms that empower the thief and nearby allies, Stealth Attacks and shadowstep skills.

Thieves are less powerful in terms of durability in comparison to some professions. They must rely on stealth, evasion, surprise attacks, and debilitating and damaging conditions to overpower their opponents. An experienced thief can take on multiple targets but preferably one at a time.

Thieves are also adept in Shadowstepping, certain skills allow the thief to disappear from one location and then instantly appear at a different location by traveling through the shadows.

Deadly Arts — Focuses on use of poisoned, and exploiting enemies with low health. Enhances dagger skills.

Deadeye — Gains access to rifles, a set of cantrips, and replace the steal mechanic with deadeye's marks.

Specter — Gains access to scepters, a set of wells, replace the steal mechanic with siphon, and gain shadow shroud.

The thief is an adventurer profession and wears medium armor.

The following crafting disciplines can create items that are useful to the thief:

In the biography step of character creation, thieves must choose what they believe is the most important characteristic to have in their line of work - anonymity, determination, or subterfuge. This choice is merely cosmetic and determines their starting head armor, which can be hidden or transmuted after character creation.

At first glance, the thief profession appears similar to the ancient Canthan practice of assassination: both make heavy use of shadowstepping to take their victims by surprise, and practitioners often rely on their knives to make swift, deadly attacks. In truth, however, the two are unrelated.