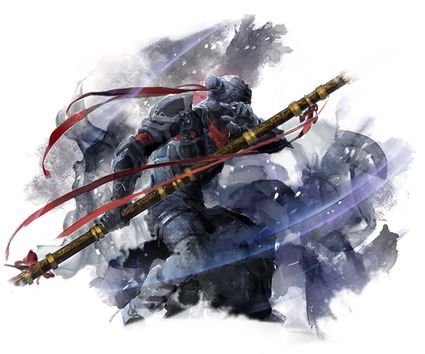 "Try keepin' up with this!"

The daredevil is a master of maneuverability and mobility. Gaining an additional endurance bar and the ability to customize their dodge roll, the daredevil has the tools to become a melee whirlwind of destruction.

Daredevil is an elite specialization for the thief unlocked with the Heart of Thorns expansion. These extremely agile thieves are well aware of the dangers of the jungle, and have trained hard to gain a third endurance bar, and learned martial arts to modify their dodge into a damage skill, or a dash. Daredevils learn physical skills, punching their enemies with their fists and throwing flying daggers. They can wield staves as melee weapons, striking their enemies with blunt force, or vaulting with it to traverse the environment and land on their enemy's head. They excel at damage dealing and mobility.

Daredevil's mechanic is the increased endurance and dodging that can have a different effect depending on the active grandmaster trait as well as reduced range on the skill Swipe replacing Steal.

Training in the path of the Daredevil does not come easily, but those who dare are rewarded with the reserves that will help them endure as they enter the jungle. Specializing as a daredevil will allow you to wield a staff as a melee weapon and utilize hand-to-hand combat styles with the physical skill category. Additionally, you’ll gain access to a third endurance bar and be able to greatly modify the effects of your dodge ability.

Training in the path of the daredevil does not come easily, but those who dare are rewarded with the reserves that will help them endure as they enter the Heart of Maguuma jungle. Daredevils are thieves who specialize in evasion, physical hand-to-hand combat and the usage of staves. They are a death machine, constantly roaming the battlefield in search of their next prey who they then crush and press the fight forward to the end as their tireless staves and fists fly true.[1][2]