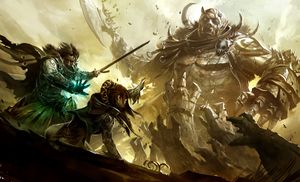 Rally is one of the ways a player can recover from downed state. Players can rally by gaining credit for killing a foe which grants experience. To gain this credit, a player must have caused substantial damage to the felled foe. To help rally themselves, a player can use their profession's downed skills to finish off damaged enemies as well as avoid incoming damage. Other revival methods include healing to full downed HP such as from Bandage, the universal downed skill, or by being revived by other players.

Like all revival methods, a rallied character is restored to 25% of their maximum health, becomes invulnerable for one second, and gains one point of downed penalty.

In World vs World, the defeat of a player will only rally one other player, and only NPCs that are part of an event such as guards and dolyaks will rally players.