This article is about the mount. For other uses, see Warclaw (disambiguation). 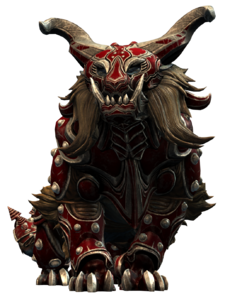 Trained for battle and siege warfare, the warclaw knows no fear.

The Warclaw is a mount available exclusively through World versus World. It is the second new mount released since the launch of Path of Fire.

As for all other mounts, unlocking Warclaw is account-wide; however, to use it in WvW, a new character should spend at least one point in Warclaw Mastery because distribution of points is character-dependent.

Discovered by Durmand Priory scholars, warclaws are magical constructs bound to armor of uncertain origin. Assembling the armor will manifest a fierce and loyal mount to ride in the Mists—but you’ll need to join the Mist War to find it.

The Warclaw is a spiritual animal bound to armor found in the Mists. It is theorized that the creature was made years ago for some ancient war in the Mists and abandoned after the war had concluded.[1] Discovered by the Durmand Priory's expeditions into the Mist Wars territories, it is related to other mystical constructs such as the sand jackals, Exalted, and Forged. The creature manifests once the armor set is placed together and imprints on the one who assembled the armor, and will disperse if the armor is disassembled. The armor itself is of Tyrian design, but mirrors styles of multiple cultures throughout Tyria's history, making its exact origin unclear.[2]

Anomaly:
Using runes with the bonus +10% health (for example:

Superior Rune of Durability or