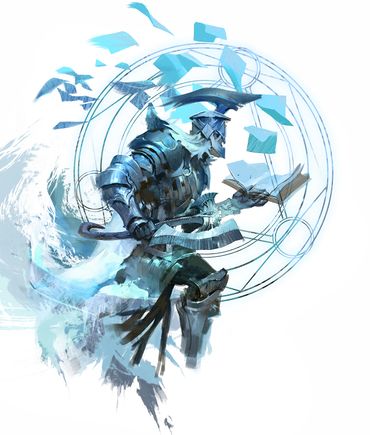 "Let the ancient magics of Vabbi burn away our foes."

Firebrands harness the power of ancient Vabbian tomes to burn away impurities and conquer their foes. Each tome contains raw, powerful magic and must be used with patience and care.

Firebrand is an elite specialization for the guardian unlocked with the Path of Fire expansion. These lore keepers were once the chroniclers of the achievements of the Elonian people, and their culture. They stand against Palawa Joko, who seeks to rewrite history in his own image. Empowered by the fiery hearts of the Elonians fighting for their lives and lands, firebrands have manifested the traditional guardian virtues as tomes: repositories of lore that firebrands bring forth to burn away the oppressors, lift the spirit of their allies, and courageously protect them from harm. They inspire allies by shouting mantras that heal and provide powerful boons, purging their impurities and their enemies alike. Firebrands can use axes on their main hand, combining fire and light to burn foes with vengeance, and pull them to their reckoning. Firebrands are very versatile, and can specialize as either damage dealers, supports, or healers.

Tomes replace virtues as the firebrand's profession mechanic. Their passive effects are identical to virtues, but using a tome replaces your weapon skills with tome skills. Each tome skill costs a certain amount of pages to cast, and the available page count is shared by all tomes. By default, firebrands have a maximum of 5 tome pages and it takes 8 seconds to generate a tome page.

Using all available pages will automatically exit a tome. Tomes can also be put away early by using the

These zealous lorekeepers are skilled in conjuring magical fire, and they use axes and mantras in close combat. Their virtues are replaced by conjured tomes, which act as weapons to rebuke enemies and protect allies.

Bug:
After first unlocking Axe Proficiency and equipping the Firebrand trait line, even before unlocking the next minor trait Purity of Word, Virtue of Courage is replaced with Tome of Courage. When activated, the player receives the Tome and their weapon skills are replaced with the tome skills. However, while tome skills can be used and go on cooldown, they have no effects. The player is therefore effectively unable to fight until the tome is stowed.