This article is about the elite specialization for ranger. For the article about druids in lore, see Druid (group). 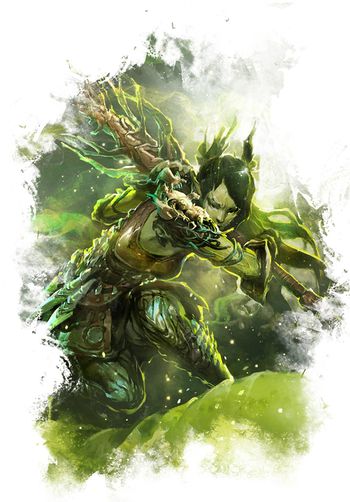 "The stars, earth, and sky above will heal us."

Druids utilize the power of nature and the stars above to heal their allies, using glyph skills to channel powerful boons and protective utilities. By generating your astral force, you can channel your Celestial Avatar form.

Druid is an elite specialization for the ranger unlocked with the Heart of Thorns expansion. These rangers, just like the druids that once lived in the Heart of Maguuma, have learned to commune with nature and the stars to become Celestial Avatars. In this state, they gain access to support skills to heal and empower their allies. Druids can wield staves, a weapon they employ to heal and support their allies. They have also learned glyph skills, that normally damage or impair nearby enemies, but switch their effects to healing and support when cast inside Celestial Avatar. Druids are masters of support, healing and empowering their allies.

Celestial Avatar is the druid's profession mechanic, changing the player's weapon and glyph skills while in the form.

denotes a skill replacement when in Celestial Avatar

Rangers entering the ancient Maguuma Jungle may attune to the long-dormant forces of Tyria to become druids capable of channeling the might of the heavens, mending allies and daunting enemies. By gaining access to the staff weapon and glyphs, these masters of support bolster their allies with mystical insight into the natural world. Their new profession mechanic allows them to accumulate astral force to become a celestial avatar, a paragon of reactive recovery and strong sustainability in a dangerous world.

As longtime allies of nature, rangers can now channel the long-dormant strength of Tyria after tapping into the primal forces of the Heart of Maguuma jungle. Druids draw astral forces into themselves, gaining the power to become celestial avatars; in celestial avatar form a druid becomes capable of bringing allies on the brink of death back to pristine condition. Those following the path of the druid can also uncover ancient glyphs, which will help them with their duty of sustaining their allies. Trudging with heroic determination into the wild lands of the jungle, druids comprehend that the beauty of the wilderness conceals great danger.[1][2]