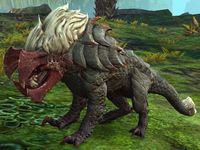 Smokescales have an ability to conceal themselves in smoke. These stealthy saurians emerge from their smoke cloud to ambush prey without warning.

Juvenile Smokescales are terrestrial pets that can be charmed by rangers.

Smokescale pets use the following skills.

At level 80, juvenile smokescale pets have the following default attributes:

Section-stub. This key section of the article is incomplete. You can help the Guild Wars 2 Wiki by expanding it.
Reason: Missing details on this other second Teku Nuhoch spot in the guide above
Pets
Retrieved from "https://wiki.guildwars2.com/index.php?title=Juvenile_Smokescale&oldid=1885450"
Categories: