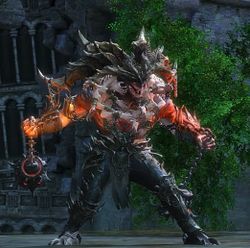 Demons are malicious creatures most often born from shards of existence within the Mists that have turned corrupted by strong malignant forces. As demons are beings of malignant sentience, they are drawn to the energy of souls and to the worlds of the living. They are seen consuming souls, but more accurately feast on the suffering, despair, and the vital energy of beings both living and dead.

Demonic hierarchy involves the strong consuming or dominating the weak while revelling in their feasts and victimization. At the same time, they hold an instinctual hatred of the living. Many intelligent demons are known to have entered into arrangements which allow them to prey on denizens of other realms or manipulate them.[1]

Some magically potent beings can turn mortals and spirits into demonic entities such as when the fallen god Abaddon turned his loyal human followers into demonic Margonites who experienced a physical transformation and did not die of old age.[2]

Because demons are mostly born directly from the Mists, they can come in a wide variety of forms, from grotesquely inhumane and monstrous to nearly identical to other species. After consuming a soul, they can digest it for centuries if not millennia for their own, twisted delight. In some cases demons may choose to feast on the memories of their victims instead, condemning the targeted prey into forgetfulness. If the demon which has devoured souls or memories is slain, the trapped essences will be released back to their rightful owners.[3]

A few demons such as Deimos are hinted to possibly be able to manifest from tortured mortals' psyches and emotions in areas where the barriers between the Mists and the realms of the living are thin.[4][5][6]

Section-stub. This key section of the article is incomplete. You can help the Guild Wars 2 Wiki by expanding it.
Reason: Add missing historical details from GW1 and GW2.

According to a Canthan legend, Kaijun Don was a healer of breathtaking beauty who showed compassion to any who sought her aid, including those who could not pay her. She caught the eye of a cruel gang leader and refused his offer of courtship, which made his men scar her lovely face past all recognition. When Kaijun's scars proved immune to even her own strong magic, she became enraged and swore revenge upon her attackers. Over the years, her quest for vengeance became an obsession that blackened her soul, until at last she made a pact with a demon who promised powerful magics in return for completing the horrific ritual that would make him flesh. Kaijun did not hesitate, and the killings she performed that day left her forever corrupted. Kaijun eventually became one of the four cardinal celestials as the Kirin, representing the emodiment of corruption and a being of pure good turned into pure evil.[7][8]

Several demons worked for the alliance of Abaddon, Dhuum and Menzies. Demons like the Fortune Teller and Razakel took on human disguises and manipulated mortals such as Shiro Tagachi and Vizier Khilbron to further Abaddon's agenda before corrupting the souls of their prey. These manipulations led to catastrophes on Tyria such as the Jade Wind of Cantha in 872 AE and the Cataclysm of Orr in 1071 AE.[9][10][11]

In 972 AE, a necromancer named Juedo summoned a demon known as Mang to Cantha via a forbidden ritual. The demon wrestled free, however, and terrorized the countryside for years until it was lured into a trap in the center of a great frozen lake where the elementalist Teinai banished it back to the Underworld.[12]

When Luxon Reavers dug into a jade mine searching for jade deposits of high quality, they delved into the nightmare realm, where they encountered a demon by the name of Kanaxai, who drove them mad and promptly twisted them into his servants. These Luxons were transformed into Outcasts, attacking their uncorrupted counterparts and their ships and mining operations within the Jade Sea. Seemingly sane Outcasts were seen, implying that they were not all twisted by Kanaxai completely.

After the Jade Wind,[13] demonic creatures named oni began to infest all of Cantha excluding Kaineng City, with some believing that they originated in the Mists, while others believe they came from someplace even more distant, dark, and cut off from the world of sanity. They would appear out of thin air, butchering anything in their path. The ones infesting Cantha came in two varieties: Lesser Oni, encountered only on Shing Jea Island, and regular oni. Some believed that they were a form of Outcast, in an advanced state of being twisted by Kanaxai.[14][15] Oni claws and talons were considered valuable by some. Blades used by oni were also wielded by Shiro'ken, constructs created by Shiro Tagachi, suggesting a connection between the two.

Stone Summit arcanists bound powerful demons into relics and even made pacts with them, leading the demons to remain loyal to the fanatical dwarves.[16][17][18] They fed the demons with victims and the emotion of hate in exchange for power; any other race attempting to make a pact with demons who had already been bound to the Stone Summit met a grisly fate.[19]

During the campaign against the returned spirit of Shiro Tagachi in Cantha in 1072 AE, a group of heroes fought against several ferocious oni during various expeditions such as the missions to Arborstone and Zos Shivros Channel.

A shadowy version of Kanaxai soon appeared in the Aurios Mines alongside a number of corrupted fish, nightmares and Outcasts, attacking a miner by the name of Captain Rion and his fellow Reavers as they mined in a jade quarry. Kanaxai and his minions were driven off and the mined jade saved.

After driving off this shadow, a group of heroes learnt of Kanaxai and went to confront the demon. On each floor of The Deep, the area where Kanaxai had made his lair, creatures of his Nightmare Horde attempt to stop the heroes, but were killed. Aspects of Kanaxai awaited the group on every floor, with aspects of Death, Decay, Depletion, Exposure, Failure, Fear, Lethargy, Pain, Scorpions, Shadows, Soothing, Surrender, and Torment present. Each aspect dealt a unique effect to the section of the abandoned mine. Crustaceans, fish, nightmares and wurms appeared in the cavern to battle the heroes but were all defeated.

Eventually, the group passed into the nightmare realm and found Kanaxai, slaying him after a fierce struggle, though the corruption he had dealt to the area remained.

During Abaddon's attempt to usher in Nightfall and free himself in 1075 AE, demons began opening portals between Elona and the Realm of Torment to permanently merge the two realms while feasting on spirits and mortals whom they came across. Several demons joined the Kournan army of Abaddon's acolyte, Warmarshal Varesh Ossa, although they did not take orders from Varesh's generals as their loyalty lay solely with Abaddon and Varesh.[20] A demon known as the Hunger blinded Spearmarshal Kormir during the assault on Gandara, the Moon Fortress and hunted down Varesh's and Abaddon's enemies until it was slain by a party led by the Hero of Nightfall.

At some point in history the dwarves trapped an entity of either demonic or nightmare origin known as the Voice in the Deldrimor treasure vault of Deepstone with a powerful arcane ward created by a magical crystal and abandoned the site.

By the time Dessa's group of fractal explorers ended up in Deepstone Fractal which depicted a distorted view of the historical event, they witnessed a group of treasure hunters finding and exploring Deepstone while searching for riches years after the dwarves' disappearance. The party encountered several possessed spiders which spoke in an ancient language that the treasure hunter Kay recognized, and they slowly learned about something being trapped within Deepstone.

Ignoring these warnings, the treasure hunters pressed on. In order to access the vault, they unwittingly removed the magical barrier shielding it, allowing the Voice to possess a treasure hunter named Torin whom it intended to use as a physical vessel to flee from its prison. Using the Light of Deldrimor, Kay and the remaining treasure hunters were able to battle the Voice who, in response, attempted to tear off their souls. The party prevailed in the end, however, and the weakened Torin asked to be saved from possession. One of the group members used the Light of Deldrimor on Torin who died as the Voice was banished.

Li Ai, who lived during Emperor Usoku's unification of Cantha circa 1637 CC (1127 AE) was wracked with grief after losing her husband Li Bo and her daughter Li Lan. Ai ascended to Sunqua Peak in order to meditate and quell her emotions. However, her inner turmoil attracted demons to her who feasted on and fueled her doubt, fears, guilt, and sorrow, and her elemental magic deeply disturbed the natural and spiritual balance on the mountain as a result. Scared to confront her unhinged mother, the spirit of Lan disguised herself as the deer-like Spirit of the Mountain and sought aid from travelers to save her mother and the mountain.

By the time Dessa and her team of fractal explorers ended up in Sunqua Peak Fractal which depicted a distorted view of the historical event, they encountered Lan, disguised as the Spirit of the Mountain, who asked them to help her restore harmony to the mountain. As they reached the mountain's summit, they discovered Ai as the Sorrowful Spellcaster meditating in grief.

Ai lashed out at the explorers, however, first telling them to leave her alone with her pain and then threatening them before attacking them. Although the explorers were able to quell the elementalist's rage after a clash, they soon learned the true source of the elemental imbalance as Ai's doubt, fears, guilt, and sorrow manifested as demons which took her over and attacked the party. After a fierce battle, the explorers were able to weaken the demons enough that Ai managed to drive them out, thus calming down the weather around the summit and uniting her with Lan.

Though its origins are unclear, a demon called Deimos worked with the Eye of Janthir, tormenting the mursaat's valued prisoner Saul D'Alessio in order to break his psyche and turn him into the mursaat's puppet while feasting on his suffering. In the depths of the Bastion of the Penitent, Deimos thrived within Saul's mind via demonic realm and within Tyria.[6]

When a raiding party led by Scholar Glenna reached the heart of the bastion in 1330 AE and some of them were drawn into the demonic realm while trying to free Saul, Deimos attempted to stop them but failed. It then manifested in the physical realm to continue the battle and intimidate its opponents. The demon continuously taunted Saul and the raiders and even ended up drawing the party into the demonic realm in order to finish them off there. However, Deimos was defeated for good when, against its expectations, Saul overcame his personal demons and joined the raiders' side. Following the demon's demise, the party returned to the physical realm. The victory was bittersweet, however, as Saul passed away soon after, finally freed from centuries of torment.