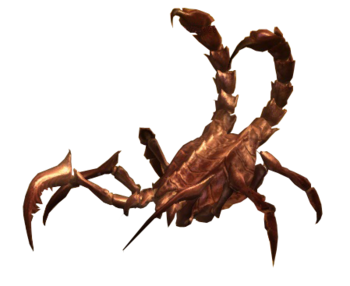 Devourers are scorpion-like arachnids with two tails. They have been seen in both the western and eastern edges of Tyria, thriving in arid and humid areas. Primarily carrion eaters, devourers have a tendency to swarm towards battlefields and other locations of mass deaths. They have a long history of being tamed by the charr, both for battle and gladiatorial entertainment purposes, who were the first known to tame devourers.

Like many arthropods, devourers thrive in colonies surrounding queens which focus on laying eggs.

Some devourers can grow to gargantuan sizes, with stingers capable of launching siege-like attacks. In the past, they were used as siege mounts by the charr, but now have mostly been replaced by mechanical tanks.