Environmental hazards are areas that apply damaging effects to players that attempt to cross them. They often prove fatal within seconds. The skimmer mount specializes in helping players safely navigate such hazards. 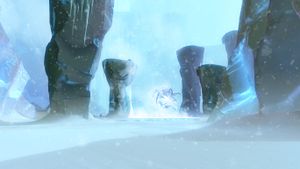 The bitter cold of Bitterfrost Frontier requires a Thaw Elixir to survive. It slows movement to a walk in addition to dealing damage. 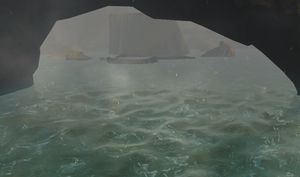 Perhaps due to the corrupting influence of the nearby Elder Dragon Primordus, the sulphuric sea water that floods the cavern of Draconis Mons is deadly to swim in. A skimmer will prevent you from taking damage. 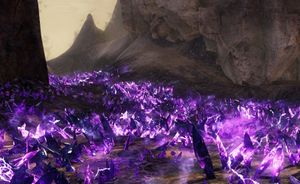 Abuzz with branded electricity, branded spikes can be found within the Dragonbrand in the Crystal Desert. A skimmer can be used to avoid taking damage. 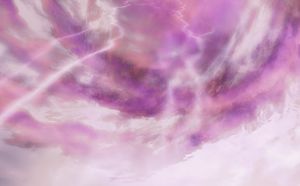 View of the sky within the Brandstorm

The Brandstorm is a large conduit of energy in the sky above the Dragonbrand, left behind by Kralkatorrik as it swept through eastern Tyria and Elona. Many dangers can be found within, from lightning strikes to flying branded creatures.

Despite raging throughout the entirety of the Dragonbrand, only the storms in certain regions present a hazard to players. While grounded, players will be struck by lightning every few seconds, dealing damage and occasionally burning. The strikes are spaced far enough apart that you will often leave combat just long enough to mount up before being struck again. Being airborne, under cover, or mounted on a skimmer will render you immune to this effect.

The Living World Season 4 story step "Eye of the Brandstorm" also forces players to deal with the hazards of the Brandstorm, but uses mission-specific mechanics instead of the effect described here. 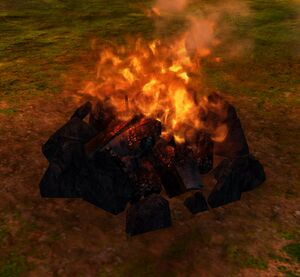 Burning when touched. Unlike lava, however, these effects cannot be avoided with a skimmer. 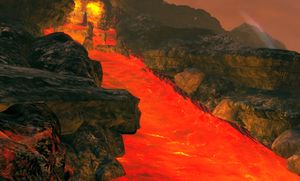 Lava is molten rock that can usually be found within the depths of Tyria or spilling from volcanoes. Lava Elementals and Destroyers frequently spawn within. It causes burning, but can be traversed safely with a skimmer. 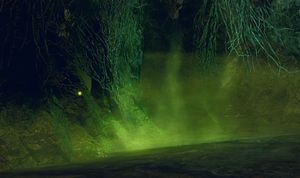 The Heart of Maguuma is host to deadly poisonous hazes, which can sometimes be found seeping from toxic Mordrem vines. Mastery of Itzel Poison Lore is required to safely enter the haze.

Quicksand is an especially deadly hazard, as it slows movement, dazes, and drains endurance in addition to dealing damage—so once you fall in, you're unlikely to make it back out. These effects can be avoided with a skimmer. 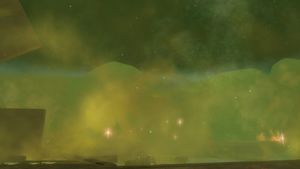 The air filling the ruins of certain abandoned Inquest labs in Sandswept Isles is choked with deadly radiation gases, a result of Rata Primus' rather dramatic decontamination protocol in response to intruders and breaches. Lots of volatile magic can be found within, but they must be gathered swiftly, as there is no way to avoid the poison's effects. 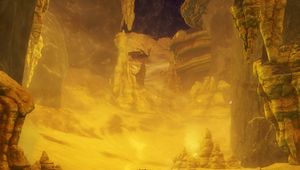 The Desolation is infamous for its inhospitable yellow sulfurous haze, which has poisoned the land since Abaddon was cast down by the other gods at the Mouth of Torment. No mortal can survive crossing it without a mount; historically, Junundu were used for this purpose, though today many explorers prefer a skimmer.