Invoke the power of the legendary assassin Shiro Tagachi. 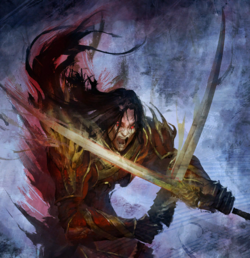 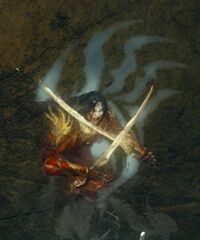 Shiro: I have returned, to fight at your side.

Shiro: I demand that you release me!

Bug:
Sylvari male characters respond with an incorrect voice line to Shiro's second question, replying with "It certainly has!". The chat log correctly displays the text as listed above.

Shiro: My power may be waning, but they will always remember my name.

When equipping both Shiro and the Legendary Alliance Stance
Shiro: I can hear them. The "heroes."
Shiro: Archemorus and Viktor stopped me once, but look around! Their people are dead. My legacy lives on.

At The Mouth of Torment
Shiro: I can feel you, my friend...
Shiro: Your power is thick. Potent.

Shiro: I wonder how long it took them to cleanse this land?

While in The Echovald Wilds
Shiro: The forest breathes again...
Shiro: A pity the Kurzicks don't breathe with it. They were an impressive people. Vicious. Gone.

While in New Kaineng City
Shiro: This was not Tah's image. This is not what the empire was supposed to become.
Shiro: Everything is so...bright. Loud.

Shiro: In another lifetime, I may have called this place "home."
Shiro: That time has long since passed. The city has been corroded.

While in Dragon's End

Atop the Harvest Temple

Shiro: A pain I will never forget... And yet, I'd do it all again just to see everything crumble.

Shiro Tagachi was a powerful assassin who commanded an army of Shiro'ken and created the Afflicted in Cantha. Originally a loyal and ambitious guardsman, Shiro Tagachi was noticed by Emperor Angsiyan due to his prowess with weapons and thus invited to join the imperial Guard as the emperor's favored bodyguard. During his service as both a guardsman and later bodyguard, a demon sent by Abaddon had disguised itself as a Fortune Teller and sought out Shiro multiple times, who consulted with her, eventually telling him that he would be killed by the emperor during the Harvest Festival. This caused him to turn to forbidden magic, breaking imperial law, and led him down the path of insanity.