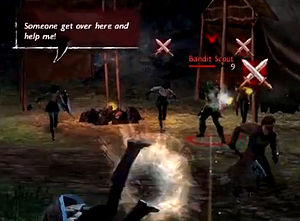 Some enemies aggro when players attack other foes they are allied with, indicated by crossed swords icon.

Generic NPC enemies will typically select targets based primarily on a range calculation, meaning the character or allied NPC such as minion or pet closest to the hostile NPC will hold its attention.[1] However, there are additional factors which influence enemy aggression, and not all creatures use the same A.I. for determining their behavior; some creatures have unique aggro and mechanics.[2]

While in combat, player characters and other creatures will generate threat against enemies. The player or creature with the highest threat will gain the aggro of the enemy or enemies if there are no other factors that may direct the enemies' aggro elsewhere (see below).

There are multiple ways to increase threat generation towards an enemy. These are typically cumulative. The actual aggro effectiveness of various threats depends on multiple factors which can vary greatly between enemies.

Players who have gained unwanted threat or aggro can lose it in several ways. Effects can be cumulative or they can be ignored by specific enemies.

There are multiple ways to gain and hold the aggro of a hostile enemy. The actual effectiveness of each condition depends on the enemy creature's A.I. and other factors.

Enemies who no longer have aggro to any players or creatures will leave combat and either begin regenerating to full health or despawn until the encounter is properly reset.

Tanking is often done to prevent dangerous enemies from downing less survivable characters or from defeating mission-crucial NPCs. Tanking in Guild Wars 2 does not require for a character to be a specific profession.[4]

Tanking may also be a mandatory combat mechanic in certain encounters, for which players will need to prepare accordingly. Certain raid and fractal bosses in particular have highly specified conditions for which player they will focus on. Tanks are often required to make use of defensive skills and effects, positioning so that the battle is advantageous to the player's side, or perform other encounter-specific strategies and mechanics.