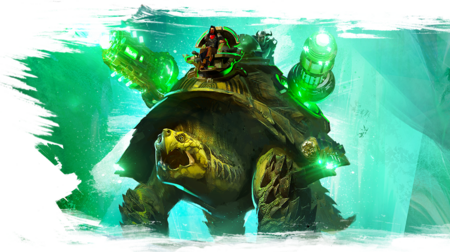 The Luxon Armada’s descendants have raised and trained these massive turtles for over two hundred years. Each mount can bear two riders: one to handle the turtle, and another to operate the weapons strapped to its shell. Raise your own walking war machine and take a friend out for combat adventures!

The Siege Turtle is a combat mount that can be used by two players at once: a driver and a gunner. It can be exclusively unlocked through End of Dragons, and can be freely borrowed during multiple events within the expansion maps. This mount, along with an upgraded skimmer, is the only one that can be also used underwater.

Upgrades to the turtle mount increase its health, improve combat efficiency and grant additional health to other unlocked mounts.

The driver controls movement and can attack with the Slam skill. The passenger can trigger Overdrive and controls the siege attacks.

You've received siege turtle ammo. Ammo is usable by the passenger for siege attacks and is accrued over time. Ammo generation can be accelerated through high-speed movement.

Your passenger has triggered Overdrive. The siege turtle's speed, acceleration, and handling are improved for a short period of time.

Notes: NPC version Siege Turtle will not have Bond of Faith.

Specifically a breed simply called Giant Turtle, in the past, Siege Turtles were the staple of the Luxon Armada in their war against the Kurzicks. Tamed and raised by the Turtle Clan, they were cared for in hatcheries, the largest of which being Gyala Hatchery that was used for other aquatic life as well. The Luxons had mounted cannons atop of the turtles' shells via scaffolding, and used magical jade as ammunition, trained at the Leviathan Pits[1][2] to fire at smoke cannister signals.[3] Not all of the turtle breed were trained for warfare, however, as some Hauler Turtles were instead trained to move heavy shipments, such as large piles of jade out of quarries. These turtles were also used by the Turtle Clan as opposed to Luxon Leviathan ships, which the other two clans, Crab and Serpent, preferred using to move around the solidified Jade Sea.[4]

Siege Turtles are still used by Canthans today as mounts, though equipped with higher technology, and a second cannon.