This article is about the hall in the Eye of the North. For the achievement section, see Hall of Monuments (achievements). 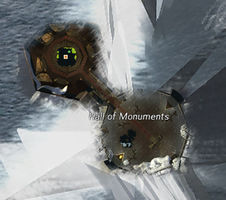 Map of Hall of Monuments

The Hall of Monuments is a ruined shrine found in the Eye of the North, located within the Far Shiverpeaks. It was constructed to commemorate the deeds of a long-dead hero who defeated the Great Destroyer, which refers to player characters from the original Guild Wars. The Hall is the reward system that allows players of the original game to access unique rewards for use in Guild Wars 2. Rewards include a full armor set for each weight, several pieces of standalone armor, miniatures, and pets for Rangers. All items are free, and in addition, all skins can be applied for free via the wardrobe from anywhere in the game. Each new point the player earns unlocks a new reward, up until 30 points. Additionally, every 5 points unlocks a new title, all the way to the maximum, 50 points.

The reward system works by linking a player's Guild Wars account with their Guild Wars 2 account. While playing Guild Wars: Eye of the North, players can earn points by completing certain tasks, such as obtaining a rare mini-pet, or by completing campaigns. By linking their accounts at account.guildwars2.com, their points from Eye of the North are transferred to their Guild Wars 2 account, which unlocks the appropriate rewards in the Hall of Monuments. Players who have not played Guild Wars for an extended period of time may need to log in and talk to Kimmes the Historian in order to complete the account link.

Players who have already linked their accounts will have a Hall of Monuments Portal Stone in their inventory whenever they create a character. Portal Stones can also be purchased for free from Sarettokk within Hooligan's Route in Lion's Arch. Sarettokk sells stones even to players who don't have their accounts linked, and to players who haven't played the original Guild Wars. These players can also visit the Hall of Monuments, though will naturally be unable to access any of the rewards.

Awarded for every point from 1-30.

Access to Kimmes the Historian was disabled for nearly five months from mid-March to the end of July in 2015, after a bug was introduced which awarded players with Hall of Monuments achievements, and their associated titles and points, without having earned them. The fix that was eventually implemented was to have the game dynamically determine at every login whether the account should be credited for the achievements.

Ever since this fix, some accounts may occasionally receive the mail below and find that their achievements, but not rewards, have been revoked. This is caused when server issues interrupt the link between Guild Wars and Guild Wars 2, and is a harmless, temporary issue that can typically be ignored until it resolves itself.[1] If the problem persists, speaking with Kimmes and/or following the steps outlined in the notes section below should fix it.