Invoke the power of the legendary champions Archemorus and Saint Viktor. — In-game description

Invoke the power of the legendary champions Archemorus and Saint Viktor.

Section-stub. This key section of the article is incomplete. You can help the Guild Wars 2 Wiki by expanding it.
Reason: Add information as it becomes available.

Archemorus: Viktor and I were somewhat famous, back in the day. We also conquered a god.
Saint Viktor: Correction: Shiro thought he was a god, but I assure you he was not.
Archemorus: Eh, what's the difference?

Archemorus: We didn't save Cantha standing around, did we, Viktor?
Saint Viktor: We certainly did not. Though I'd prefer it if you called me by my full title.
Archemorus: Apologies, most revered Saint Viktor of zu Heltzer.

<Character name>: I thought the Luxons and Kurzicks didn't get along, but you two seem pretty friendly.
Saint Viktor: Oh, it wasn't always this...cordial. After we awoke in the Mists, Archemorus was angry.
Saint Viktor: It took a long time for him to accept death. But we did what lost souls should: we stayed together.
Archemorus: Oh, Vikky... I—
Saint Viktor: I hate him—I meant to say that I hate him.

While in Seitung Province
Saint Viktor: Shing Jea... It hasn't changed much, has it?
Archemorus: In some ways, it has. But the grass is as green as I remember—the sky just as blue...
Saint Viktor: My thoughts exactly. It's too bright; I miss the shadow of Echovald. Can we go there instead?

While in New Kaineng City
Saint Viktor: "New" Kaineng? Too many Ministries, eh? Did they run out of room?
Archemorus: The system needed to fall apart to be rebuilt. And it was. Only took a tsunami to set the record straight.
Saint Viktor: And then some.
Archemorus: I welcome the change. The city needed more color.

While in the Echovald Wilds
Saint Viktor: It's so... quiet.

While in Dragon's End
Archemorus: This isn't my home. This is a battlefield.
Saint Viktor: At least the battle is nearing its end.

Atop the Harvest Temple
Archemorus: This place...
Saint Viktor: We will never forget.

While invoking Legendary Alliance Stance with Shiro equipped
Archemorus: Was that Shiro's voice I heard?
Saint Viktor: Shiro? Did you say Shiro? Who invited that filth?
Archemorus: At ease, my friend. He's as dead as you or I. And somewhere close, perhaps! Shall we pay him a visit?

When boarding a Skiff
Archemorus: That's more like it. The sound of the waves, rocking back and forth... 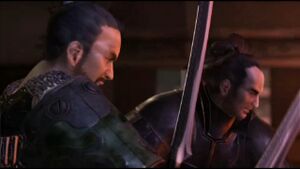 Archemorus and Saint Viktor about to engage Shiro Tagachi in battle.

The Kurzicks and Luxons had been bitter enemies in Cantha for centuries. However, Emperor Angsiyan managed to sign new treaties of cooperation with the two vassal states, bringing them further into the imperial fold than they had been for hundreds of years. Though it was never publicly acknowledged by the imperial government, let alone Emperor Angsiyan himself, his bodyguard Shiro Tagachi deserved much of the credit for bringing the Kurzicks and the Luxons to the negotiating table. The deadly assassin spoke a language that the warring cultures could understand, and even their champions—the Kurzick Saint Viktor zu Heltzer and the Luxon Archemorus—stood side by side to pledge their allegiance to the one true emperor. This renewed cooperation with the empire extended so far that the Kurzicks and Luxons declared peace with each other, and Archemorus and Saint Viktor, along with their respective retinues, joined the emperor on his visit to the Harvest Temple in 1382 CC (872 AE) for that year's Harvest Festival as honored guests. At some point, the temple had been the site where the two champions had received their power from.[1][2]

The champions respectfully stayed outside unarmed as per custom while the emperor walked into the temple's innermost sanctum during the ritual in the company of Shiro whom he somehow allowed to enter the sanctuary armed against tradition. As Angsiyan gave thanks to the Five True Gods for another bountiful year and was about to receive the second blessing of Dwayna, however, Shiro unexpectedly betrayed the emperor and slew him and the ritualists in the entourage. The last surviving ritualist fled and managed to ring the ceremonial gong of the temple before being struck down by the treacherous bodyguard. She fell down with an agonized scream, alerting people outside that something was amiss. The two champions of the vassal factions heard cries that the emperor was in trouble, and did not hesitate. They left their ceremonial positions at the head of their own faction's delegations and charged after the guards to Angsiyan's side, soon followed by their respective factions' kinsmen.

After dispatching the ritualists, Shiro began using dark magic to tear Angsiyan's soul from his body, consuming it with his raw will and feeding on the emperor's life force as it drained through the conduit of the assassin's enchanted swords. Historical records differ on what happened next.[3] Some sources claim that the assassin Vizu, who had also been alerted to the scene, managed to reach Shiro well before the two champions and the guards, and disarmed him before the Betrayer retaliated and disarmed her in return until the other champions entered the sanctuary to lend her their aid. In other tellings the emperor's guards and a group of armed Kurzicks and Luxons burst into the sanctum first and battled Shiro head on, only to be cut down by the magically empowered Betrayer until Vizu arrived to distract and weaken Shiro long enough for Archemorus and Saint Viktor to finally arrive and face the treacherous bodyguard in combat.

Before the wounded and dazed Shiro could recover his blades and continue to consume the emperor's soul, the unarmed Archemorus and Saint Viktor took the opportunity to take up the Betrayer's discarded swords. Shiro raised himself to his knees, but the Luxon and the Kurzick champions met him with his own blades and nearly cut him in half. As the twin swords sliced into his form, Shiro screamed. This enchanted death wail unleashed the magic of Dwayna which he had stolen from the emperor. It caused the Jade Wind which turned all it touched into stone, including the two champions who were its first victims.[4]

Some time after the Jade Wind, Saint Viktor's ashes were placed in the Urn of Saint Viktor which was held within Cathedral zu Heltzer, also known as Arborstone, while Archemorus's bones were made into the Spear of Archemorus. They became important, magical relics of their respective peoples who turned hostile towards one another once again. According to tradition, the Luxon clan that won the annual Convocation was awarded with both the right to possess the Spear of Archemorus for that year and the honor to slay the magical kraken Zhu Hanuku.[5]

In 1072 AE, heroes managed to win the trust of both the Kurzicks and the Luxons and recovered both relics to use them in battle against Shiro who had returned as a vengeful spirit. Although the heroes managed to set Shiro back at first, it cost them the two relics which were destroyed in combat.[6][7]