This article is about the skill type. For various consumables produced by guilds, see guild banner.

Banners are a skill type exclusive to warriors. Once summoned, banners provide pulsing boons to allies within their area. Banners cannot be interacted with and are indestructible. 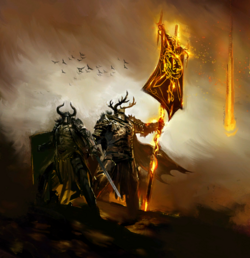