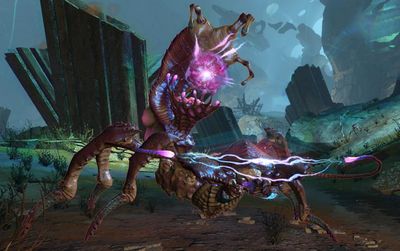 The chak are insectoid creatures that exhibit unusual defensive and offensive capabilities. Their bizarre physiology poses an interesting puzzle for researchers--provided those researchers are willing to brave swarms of chak in their natural habitat.

The chak are insectoid creatures that can be found in the Heart of Maguuma's underground. They colonize in hives around exposed ley lines, feeding off of the magical streams and lay their eggs where they can get easy access to ley energy without surveillance.

Unlike normal creatures, the chak feed on the ley lines directly, and utilize this energy in their biology such as to produce shields or projectile attacks. Because of their unusual nature, the chak are attracted to heavy concentrations of magic, though they naturally avoid Elder Dragon minions.

Chak are known to produce an acidic goop-like substance used to trap and damage prey, and create their hives.

There is not much history known of the chak, the oldest known mention of them being from Nuhoch who are only recent inhabitants of the Heart of Maguuma themselves and try to avoid contact with the chak when possible. In 1173 AE, Rata Novus was overwhelmed by the chak and completely wiped out. In 1328 AE, the Pact attempted to utilize the chak against the Mordrem, luring them into contact with each other to contest for the same resources. 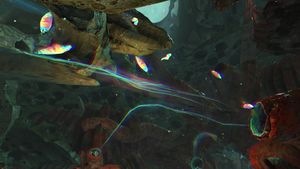 Chak thrive in colonies situated around hives, which they always place near magical sources both natural and artificial. Should the local magic run out, the chak will simply abandon their hive and move on, as seen with the chak abandoning Rata Novus after it shut down. However, they will also return to old locations should magic ever resume.

They will lay their oval shaped eggs in the hive pods structured around a ley line stream, allowing for maximum absorption of Ley energy by the eggs. Sometimes the eggs are protected in individual rocky nests. Occasionally they can be observed gently floating on the streams of ley energy.

Little is known about their hierarchical structure, beyond giant chak called Gerents being their hives' strongest defensive measures.