Sohothin is a legendary blade of fire and war, twin of Magdaer, and relic of Ascalonian heritage. It is presently wielded by the charr hero Rytlock Brimstone.

Sohothin was once Balthazar's own sword.[1] Like its twin "sister", Magdaer, it is a powerful holy artifact, given to Ascalonian royalty by Balthazar himself as a gift of peace to protect the kingdom against invaders.[2][3]

The sword's last human owner was Prince Rurik, who was killed by the Stone Summit dwarves near the Frost Gate, and whose reanimated corpse was forced to fight for Vizier Khilbron near Abaddon's Mouth in 1072 AE. There, Rurik was put down by his former allies, and the volcano erupted soon after, burying him and his sword.

After King Adelbern had used Magdaer to cast the Foefire curse which decimated Ascalon City and turned Ascalonians into vengeful ghosts who would attack anyone trespassing on their grounds for centuries to come, a legend began spreading. According to the legend, if either Sohothin or Magdaer returned to the haunted remains of Ascalon City in the hands of the rightful king of Ascalon, the curse of the Foefire would be lifted, and the ghosts would finally be laid to rest.[2][4][5]

Roughly two hundred years after Sohothin had been lost in the Ring of Fire, the charr Flame Legion managed to recover it and returned it to Ascalon with the intent of delivering it to their Imperator Gaheron Baelfire. While the sword was being stored in an Ascalonian garrison, however, it was stolen by an undercover Blood Legion agent: Rytlock Brimstone. Rytlock's actions jeopardized the mission, which had been unrelated to the sword, and put his fellow warband member Crecia Stoneglow at risk of discovery. However, thanks to Imperator Bangar Ruinbringer's eagerness for the Blood Legion to strike back against the Flame Legion using the fire magic Baelfire had sought to control, Rytlock was forgiven and was ordered to use the sword in battles as a propaganda tool. Rytlock quickly gained fame and became respected by his allies and feared by his enemies, although this success distanced him from his Stone Warband.[3] Despite this success, or perhaps because of it, Rytlock was reluctant to share the details of how Sohothin came to be in his possession.

During their first meeting in 1319 AE, Rytlock and Logan Thackeray, as well as the sylvari Caithe, ended up fighting against Destroyers against whom Sohothin's magic proved to be ineffective. After finding an alternate way of defeating the Destroyers, Rytlock and Logan had a heated argument about the ownership of Sohothin as Rytlock viewed it as his while Logan demanded Rurik's sword to be given to human custody. The pair's clash over the sword near Lion's Arch caused great property damage and made the Lionguard arrest them along with Caithe. The trio were given a chance to fight for their freedom by participating in battles in the gladiatorial arena in Lion's Arch. After the trio's billet was bought by an adventuring band which included Eir Stegalkin, Garm, Snaff and Zojja, they joined forces and fought against various minions of Elder Dragons as a guild called Destiny's Edge.

Sohothin proved invaluable during many of the guild's adventures, and Logan eventually relented about his demands for the sword as he and Rytlock grew to care for each other as brothers in arms. Following the deaths of Glint and Snaff in the battle against the Elder Dragon Kralkatorrik, however, Rytlock returned to the Blood Legion and distanced himself from his guild mates, feeling betrayed by Logan abandoning the guild to save Queen Jennah in the Ogre Revolt. He began relying on Sohothin and clawed his way to the top by killing anyone who insulted him, eventually becoming a tribune who was assigned to the Iron Legion's Black Citadel as one of the Blood Legion representatives.

When Rytlock, Eir and the Pact Commander braved the Ascalonian Catacombs in search of Sohothin's sister sword Magdaer in 1325 AE, they encountered the ghost of King Adelbern who sensed Sohothin's presence and initially thought that his son Rurik had returned. When the ghostly king realized that Sohothin was now wielded by a charr instead, he grew furious and attempted to invade the surface world with his minions. However, the group managed to defeat Adelbern for the time being and Eir took Magdaer with her before they fled from the haunted catacombs.

Sohothin in Barradin's Vaults right before disappearing into the Mists.

In 1327 AE, after years of research with the Durmand Priory, Rytlock came to believe that he had found the correct combination of elements to reverse the Foefire spell caused by Magdaer. Prior to their Exodus, the Six Gods had given the Ascalonians two magical swords, Sohothin and Magdaer, and a magic crown. After gathering up the crown fragments, Rytlock, Imperator Smodur the Unflinching, Rox and the Pact Commander headed into Barradin's Vaults to perform the ritual. However, Rytlock's attempt failed, and the sword was lost to the Mists. Since it was impossible to dispel the Ascalonian ghosts without Sohothin, Rytlock had to quickly follow the sword into the portal, which closed up behind him.

After his return from the Mists and participation in the war against the Elder Dragon Mordremoth in 1328 AE, Rytlock remained secretive about what he had experienced while being away from Tyria. He actively avoided calls from the brass at the Black Citadel who wanted to learn more about how he had found Sohothin. In 1329 AE, the tribune was stripped of his rank and apprehended by the Adamant Guard who brought him, along with Sohothin, back to the Black Citadel for questioning about his experiences in the Mists. 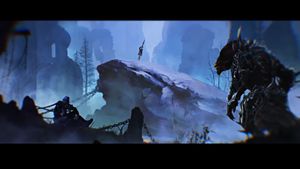 In 1330 AE, Rytlock showed up in the Free City of Amnoon with his rank in the Blood Legion restored and all the charges cleared for reasons he did not divulge. It was not until he, Canach, Kasmeer Meade and the Pact Commander nearly lost their lives in the fight against the now rogue god Balthazar in the Desert Highlands that the charr let his companions in Dragon's Watch know about his earlier experiences.

While in the Mists, Rytlock had come across Sohothin whose fire had been extinguished. Next to the sword sat a prisoner resembling an old man who had greeted the charr and told him that he could reignite the flame, which he did. In gratitude, Rytlock had used Sohothin to sever the chains binding the prisoner who in turn had instructed the charr to enter a portal, which had opened near them, so it could take him home. Having seen the God of War in action in the Desert Highlands, Rytlock could finally identify him as the prisoner who had restored Sohothin's flame and whom he had unwittingly freed earlier. The group later learned from the goddess Kormir that Balthazar had been stripped of his powers and imprisoned in the Mists following his failed insurrection against the other gods.

By the time the Pact Commander had rallied an army of Awakened to stand against Balthazar's Forged in the Battle of Kodash Bazaar, Rytlock decided to lend Sohothin to the Commander, believing the sword to give the Commander an edge should the God of War face them again. Empowered by Sohothin, the Commander was able to free the young dragon Aurene from within the Warbeast which Balthazar had been using to bring down the Elder Dragon Kralkatorrik in his quest to attain more power. With Aurene and Sohothin's help, the Commander was able to battle the fallen god on even terms and eventually slay him, preventing Tyria from being destroyed although as a result both Aurene and Kralkatorrik were empowered by the magic they had absorbed from Balthazar's demise. After the battle, the Commander handed Sohothin back to Rytlock. 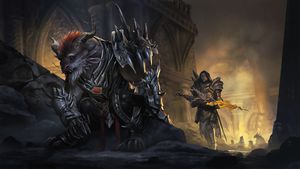 In an attempt to put a tracker inside Kralkatorrik to predict the Elder Dragon's movements in the Mists in 1331 AE, the Commander and Blish sought out Balthazar's greatsword which they intended to use as a bait to draw Kralkatorrik to it. The greatsword had gone dormant since Balthazar's demise, however, so Rytlock was asked to travel to his allies' latest base of operations, Sun's Refuge, where he successfully used Sohothin to restore the greatsword's magic.

After the disastrous end to the Pact's clash against Kralkatorrik in the battle of Thunderhead Keep in 1332 AE, Rytlock contemplated the failure to stop the empowered Elder Dragon's rampage and forgot his sword in the rubble. Reminiscing his past, he came to the conclusion that he had relied on Sohothin for too long, and his desire to possess it had cost him many past relationships and caused the chain of events which had let both Balthazar and Kralkatorrik cause great damage to Tyria and the Mists. When Logan found Rytlock and offered Sohothin to him, Rytlock decided to leave the sword behind for the time being.[3]

Following Aurene's revival and her and the Commander forcing Kralkatorrik out of the Mists, Rytlock took back the discarded Sohothin and used it in combat against Kralkatorrik's minions and other hostile Mist entities during the battle of Dragonfall which ultimately led to Kralkatorrik's death and Aurene's ascension as a new Elder Dragon.