I never thought, until I met Jory and you, that I'd be the kind of person who'd overcome evil.

Kasmeer Meade is a member of the Mesmer Collective from a noble family. A staunch member of Dragon's Watch, pious follower of the Six Human Gods and lover of Marjory Delaqua, she has to balance her responsibilities with her adventuring companions and her duties in Kryta. Kasmeer has a nervous tic in the form of uncontrollable hiccups whenever she is afraid.

Kasmeer Meade was born to a wealthy noble family consisting of a father, mother and her brother Kyle Meade who lived in Divinity's Reach. She became a childhood friend of Lord Faren with whom she exchanged kisses when they were eight although their relationship never advanced further despite Faren's attempts at flirting.[1] Kasmeer was tutored in the mesmer arts from a young age, and mastered the use of staff over time. After her mother had passed away, she inherited the mother's staff which had been in the family for generations. At some point Kasmeer was admitted into the Mesmer Collective.

Section-stub. This key section of the article is incomplete. You can help the Guild Wars 2 Wiki by expanding it.
Reason: Missing her involvement in some of the Season 1 story.

Kasmeer's family fell on hard times when her father was murdered in debtor's prison after spending everything to pay off the debts of her gambling brother, Kyle, in early 1326 AE. When the creditors took all of the Meade family's possessions, they allowed Kasmeer to take a single item from the house: she took a stuffed bear she had since she was young that had been a gift from her father, and she had her mother's staff with her already. A minister moved into the Meade house shortly after.[2]

Distraught by losing her father and possessions, Kasmeer decided to leave the unsympathetic nobility of Divinity's Reach. She began searching for a job, which led her to be employed by the detective necromancer Marjory Delaqua to make ends meet. One of Kasmeer's first assignments was to travel to the recently opened vacation resort on Southsun Cove and meet with potential clients there. While traveling aboard a ship to reach her destination, she spotted Lord Faren sneaking aboard as well. By the time the ship anchored at the cove, Kasmeer ran into Inspector Ellen Kiel who spotted Faren being a stowaway. She vouced for Faren not being a troublemaker, convincing the inspector to leave him alone. While staying at Pearl Islet, she spent time on the beach speaking with Faren and learned about attacks from karka who had been riled up by the rogue sylvari Canach's toxins.

Kasmeer was present when Logan Thackeray hired Marjory to investigate the death of Captain Theo Ashford during Dragon Bash and noticed Logan's surprise at seeing a noble like her in a seedy bar like The Dead End. During this time she also learned about Marjory's mysterious spy contact whom she began humorously calling "Mister E".

When an invisible wall was discovered in the middle of Viathan Lake later that year, Kasmeer joined Marjory in investigating the situation. She was able to shatter the powerful illusion causing the veil, revealing the concealed Tower of Nightmares guarded by the Toxic Alliance. The pair, along with the Durmand Priory and the Pact Commander, entered the tower and managed to put an end to Scarlet Briar's machinations within. It was during this time that Kasmeer and Marjory were properly introduced to the Commander's other allies, Braham and Rox, and talked with them.

Kasmeer and Marjory were called to action once again when Scarlet attacked Lornar's Pass with a massive Twisted Marionette controlled from above by her airship, The Breachmaker, in an attempt to perfect a new weapon. The pair joined forces with the Commander, Braham, Rox and their new ally Taimi to defeat the construct and thwart Scarlet's latest plan. After the battle, they reunited at The Dead End where Kasmeer finally opened up about the fates of her family and the circumstances that had led her to be employed by Marjory. The necromancer felt sorry for Kasmeer and insisted on her staying with her for the night so Kasmeer would not have to be alone, an offer which Kasmeer eagerly took.[2] 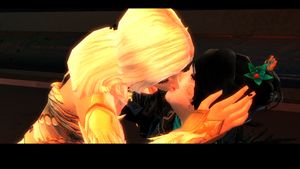 Kasmeer, kissing Marjory Delaqua after finding her to still be alive.

Following Scarlet's attack on Lion's Arch, Kasmeer traveled to the beleaguered city to help with relief efforts. Once the deadly miasma had cleared, she joined the fight against Scarlet's Alliance, and eventually found herself aboard The Breachmaker itself, cornering the sylvari mastermind who had been injured fighting invading adventurers. Scarlet, broken but not beaten, severely injured Marjory and Braham, and the enraged Kasmeer, believing Marjory to be dead, engaged Scarlet in fierce combat. She distracted Scarlet with illusions and cruel taunts while the Pact Commander got close enough to finish the wayward sylvari off. Upon returning to Marjory, Kasmeer realized that the necromancer had survived Scarlet's attack and kissed her in relief, cementing their budding relationship.

The group evacuated the falling flagship while failing to prevent it from completing Scarlet's prime objective: drill into the ley lines and direct them west to the Heart of Maguuma. Shortly after the destruction of The Breachmaker, a loud cry resonated throughout Tyria although its origin remained unknown at first. As the surviving and beaten members of Scarlet's Alliance fled from the destroyed city upon their leader's demise, Lion's Arch was reclaimed.

Some time later, Kasmeer and the rest of the group returned to The Dead End bar to discuss the aftermath of the battle and their future plans, and she sent an invitation to the Commander to join them as well. While there, the group met with Marjory's big sister, Seraph Belinda Delaqua, who had come to check up on Marjory before departing on her latest mission to the Brisban Wildlands. During a conversation with the Commander, Kasmeer complimented the Commander for their teamwork in the battle against Scarlet and that her hiccups were gone. She also learned that the Commander suspected the loud cry originating from an Elder Dragon which Scarlet may have stirred on purpose. Kasmeer admitted to not believing herself to be a person who would overcome her fears and evil while the Commander told her that she was braver than she thought.

Section-stub. This key section of the article is incomplete. You can help the Guild Wars 2 Wiki by expanding it.
Reason: Missing summary from Season 2.

Section-stub. This key section of the article is incomplete. You can help the Guild Wars 2 Wiki by expanding it.
Reason: Missing summary from Heart of Thorns.

Section-stub. This key section of the article is incomplete. You can help the Guild Wars 2 Wiki by expanding it.
Reason: Missing summary from Season 2. 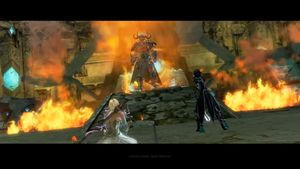 Kasmeer and Rytlock arrived in Elona before the Commander. Upon the Commander's arrival in the Free City of Amnoon and being detained by Captain Rahim, Kasmeer, as part of the human delegation, vouched for the Commander and confirmed access to Amnoon. After catching up with Rytlock and Kasmeer, who expressed her fear about confronting one of the gods she had grown up worshipping, the trio entered Amnoon to speak again with Captain Rahim.

When the city was being assaulted by Balthazar's Forged troops, the city considered allying themselves with others for aid, but were at an impasse on which they should choose. Representatives from the Mordant Crescent, corrupted former members of the Sunspears, had arrived offering aid, but it would require allying themselves with Palawa Joko, a powerful undead Lich. Another option was allying with Kormir's priesthood and the remaining Sunspears, ancient guardians of Elona who may bring hope to the citizens, but doing so would incur Joko's wrath. A final option was to remain independent as before, and step up recruitment of cavaliers to protect Amnoon. Kasmeer was supporting the Sunspears, but the choice would be the Commander's. After their decision, Kasmeer pulled the Commander aside and spoke to them about why she supported Kormir and how Balthazar's goals may be noble even if his path was not.

After the defeat of Balthazar with Kralkatorrik and Aurene absorbing his powers, Kasmeer was sent with Marjory to keep an eye on the Elder Dragon's movements. They found Kralkatorrik perched on a mountain in Western Kourna and noticed him acting strange.[3] These actions were later revealed to be the Elder Dragon testing his newfound powers by creating remote Brandstorms and creating Death-Branded minions from corpses.

During the political summit between Elonian factions in the Fortress of Jahai in 1331 AE, Taimi initially could not raise Kasmeer and Marjory on the remote communicator, which made her worry. Some time after, the pair did manage to get in contact with Taimi much to her relief, only to reveal that Kralkatorrik had suddenly vanished from the mountain.[4] The Crystal Dragon's disappearance was later revealed to be him mastering Balthazar's power to traverse the Mists, which he had entered to devour more magic and send Branded minions throughout Elona in search of Aurene.

As the Pact and the Elonian alliance prepared to face Kralkatorrik in Thunderhead Peaks in 1332 AE, Taimi contacted Kasmeer and Marjory and updated them on what had been happening in Elona since their last meeting. During the conversation Kasmeer and Marjory learned that Aurene had devoured Palawa Joko and let Taimi know that they had been busy evacuating villages which had been targeted by the Branded.

Section-stub. This key section of the article is incomplete. You can help the Guild Wars 2 Wiki by expanding it.
Reason: Missing some of Kasmeer's involvement in Bound by Blood.

Some time after the death of Kralkatorrik, Kasmeer, along with Marjory and the rest of Dragon's Watch, was present at the All-Legion Rally organized by Imperator Bangar Ruinbringer in Grothmar Valley. Afterwards, she helped train charr cubs by creating illusions of herself and various enemies—such as Ascalonian ghosts, Risen, Mordrem, Branded, Icebrood and Destroyers—for them to fight.

[Group Event] Defeat the very real devourer before the cubs are forced to retreat! (80)

Greets
Greetings.
How pleasant to see you.
Oh, how are you?
I adore what you're wearing. I must get a dress in that color.
Am I real or an illusion? (laugh)
Hello.

Aggro
You should know I'm not all smiles.