This article is about the NPCs. For the novel, see Ghosts of Ascalon.
Spoiler alert: The following text contains spoilers relating to Ghosts of Ascalon, the personal story, and Living World Season 2.

Concept art of the Ascalonian ghosts.

Didn't we already defeat them once?

Ascalonian ghosts, also known as Foefire ghosts,[1] were once humans who lived in Ascalon during the later years of the human-charr conflict. When the charr were about to overrun Ascalon City, King Adelbern cast the Foefire spell which led to his and his subjects' deaths and incinerated the attacking charr force. The curse turned the affected humans into vengeful ghosts who began haunting the ruined city and the surrounding countryside. The charr have been fighting against the spectral army ever since.

The Foefire's lingering effect makes the ghosts reform every time they have been killed. The ghosts view all the living, charr and non-charr alike, as threats that need to be eliminated. According to a human legend, the ghosts can only be set free once the Foefire curse has been lifted via a ritual performed by the current Ascalonian ruler from King Doric's lineage who wields King Adelbern's crown and either Magdaer or its sister sword Sohothin.[2][3] 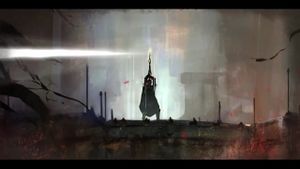 According to an ancient Ascalonian legend and an Orrian scroll, the Six Human Gods formulated a magical ritual and gifted three holy artifacts needed to enact and reverse it—a magical crown, the god Balthazar's own sword Sohothin and its twin Magdaer—to the royal human lineage as protection against invasion in the past. The artifacts, as well as the knowledge how to use them in the ritual, would eventually pass on to the Ascalonian line of human kings.[4][5]

When the charr breached Ascalon City in the later stages of the human-charr conflict in 1090 AE, King Adelbern, in an act of desperation, shattered his magic sword Magdaer.[6] Using the blade along his crown made Adelbern cast the Foefire, a blast of tremendous energy which obliterated the invading charr army but cursed the humans caught in the blast by turning them into ghosts.

As their bodies were destroyed by the Foefire, the spirits of the Ascalon Army became trapped in the land of the living performing the tasks they were doing on the day of their death. The Foefire's effect affected much of Ascalon's human population, only sparing the southern region containing the Stronghold of Ebonhawke.

According to a legend, the ghosts can only be set free once the Foefire curse has been lifted via a ritual performed by the current Ascalonian ruler from King Doric's lineage who wields King Adelbern's crown and either Magdaer or its sister sword Sohothin.[2][3]

Section-stub. This key section of the article is incomplete. You can help the Guild Wars 2 Wiki by expanding it.
Reason: Add missing information from personal story, Ascalonian Catacombs story, and open world dialogue.

Following the Elder Dragon Kralkatorrik's rise leading to the creation of the Dragonbrand and the subsequent invasion of the Branded, a group of charr Sentinels realized they were able to instigate fights between the Branded and the Ascalonian ghosts by throwing Ascalonian weapons at the Branded and Brand crystal shards at the ghosts at locations where the two enemy forces were converging such as Blightwater Basin.[7]

In 1327 AE, Rytlock Brimstone believed he had figured out a way to end the Foefire curse and set the Ascalonian ghosts free. Armed with knowledge about the ritual that he had dug up from an ancient Orrian scroll found in the Durmand Priory, he had come to believe that he might be able to end the curse with Sohothin and King Adelbern's crown. After the Pact Commander had helped him locate the missing fragments to assemble the crown, Rytlock, the Commander, Rox and Imperator Smodur the Unflinching descended to Barradin's Vaults to test Rytlock's theory while fighting ghosts along the way.

After charging up Sohothin with the energy of the slain ghosts, Rytlock began the cleansing ritual by using Sohothin and the crown and uttering magical words he had found in the Orrian scroll. While the ritual weakened nearby ghosts and reduced their numbers in and around the crypt as they entered the Mists, Rytlock was unable to end the curse completely and instead witnessed Sohothin being dragged into the Mists as well. Rytlock jumped after the sword as the portal was closing, realizing that losing Sohothin would deny the charr the chance to finish the ritual.[5][8]

Later that year, the Pact Commander met with Logan Thackeray at Camp Resolve and informed him about Rytlock's attempted cleansing of the Foefire and how the ritual had been partly successful with clearing a few of the ghosts. Logan was impressed by the news and believed that this success was proof that the ghosts could be set free one day. However, Logan also surmised that Rytlock may not have fulfilled all the conditions of the ritual; according to the human legend, only the heir of Ascalon would be able to fully end the curse.[2][3] In a later conversation, Logan remarked that despite the Ascalon line having died with Adelbern and Prince Rurik, both Krytan and Ascalonian royalty descended from King Doric, so other human nations' royal bloodlines might be able to fulfill the conditions of the ritual.

Ascalonian ghosts retain their human forms but their flesh has been replaced by a pale-blue ectoplasm. According to Ghosts of Ascalon, killing an Ascalonian ghost outright is difficult—attacking them only removes ectoplasm from the form until they dissipate and, after a period of time, which may vary, the slain ghost will simply reform.

Unlike many other ghosts, most Ascalonian ghosts will not participate in rational conversation due to being infected by the madness of the Foefire ritual. Their zeal to defend Ascalon is absolute, and anything living is seen as charr or an ally of the charr and therefore a threat that must be eliminated. The ghosts will continue at their tasks until the Foefire ritual is undone. There are only two known exceptions to this rule. King Adelbern as the ruler of the ghosts, while still maddened by the curse and driven by revenge, can hold extended conversations and debates with his enemies without immediately attacking them. Bria, a powerful necromancer in life who haunts Hellion Forest as a ghost, is able to reform like other Ascalonian ghosts but has also retained her sanity.[9][10]

The Elder Dragons seemingly cannot corrupt Ascalonian ghosts. It is unknown if this is due to the divine origins of the Foefire spell and the three artifacts needed to cast it, as divine magic has been known to resist dragon corruption and even ward off and weaken dragon minions.[5][11]

Unlike most ghosts, Ascalonian ghosts avoid water, and will not pursue their foes or their former possessions into water.

The asura Kryxx Fizzleban has invented the Ghost Collector which sucks up injured ghosts' essence and places them in the containment unit invented by Legionnaire Jenk Cutspecter of the Specter Warband. These inventions allow the Iron Legion to keep the ghosts trapped in machinery made from a specific iron alloy which the ghosts are supposedly unable to escape from as long as the containment unit itself is not damaged.

Aggro
Destroy them here!"
The people of Ascalon will run no more!
Balthazar, grant me victory!
Need assistance over here!
We're under attack!

Death
Ascalon will be my final resting place...and yours!
Cruel fate.