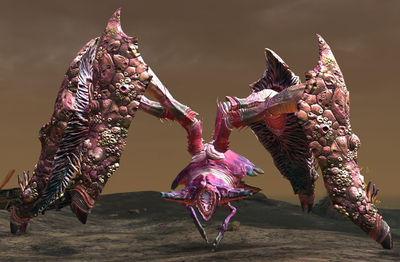 The karka (Levvi's Leviathanus Carcinus,[1] plural can be either karka or karkas) are aquatic creatures from the depths of the Unending Ocean that have been forced onto the surface of Tyria by horrors from deep within the ocean. They were first discovered on Southsun Cove after the defeat of Zhaitan by Pact forces.[2] They've since been discovered on the Ring of Fire and around Dajkah as well, though the largest colony still exists on Southsun Cove.

Karka are a deep-ocean crustacean race capable of creating extremely hard exterior shells. As the karka age, their shells harden, eventually becoming impenetrable. They are only vulnerable when they're hatchlings or when they shed their shells for larger ones as they grow. As karka are harmed, pieces of their armor get knocked off. Karka produce a webbing substance that they spit out which hardens quickly. They both trap their prey in this spit and build their hives out of this substance, and even partially encase their eggs in it.

After their initial assault on Lion's Arch, Researcher Levvi, with the aid of her krewe and adventurers, developed an acidic solvent to help dissolve these hard shells and webbing in order for the Lionguard to counter-attack and invade Southsun Cove.

The karka are an ancient race who spent most of history in the ocean depths. According to Zommoros, they haven't been seen on the shores since ancient days when the world was "emptier" and the continents were shaped differently. The karka as a race have encountered the Elder Dragons before in the past, so they know the dangers they present, which gave them the knowledge to avoid Orr and the remaining Risen when fleeing from twisted creatures inhabiting the deep.[2]

When the Consortium investigated Southsun Cove in efforts to find a tropical vacation location in 1325 AE, they unintentionally provoked the karka, and were mostly wiped out by them. The karka then tracked down the survivors who fled to the mainland, attacking Morgan's Spiral, Garenhoff, and Lion's Arch, making their presence known to the rest of Central Tyria. The Lionguard, led by Inspector Ellen Kiel, launched a counterattack and greatly diminished the karka's presence on Southsun Cove, killing the island's only known Ancient Karka in doing so.

Later, in 1326 AE, Canach had instigated the karka utilizing the Fervid Censer to rouse Southsun Cove's wildlife into assaulting the Consortium resorts and settlements that were made after the assault on the Ancient Karka. This instigated the assault of various karka hive leaders, and resulted in a mutation causing tentacled appendages to appear in their hives.

In 1329 AE, more karka were discovered by asura krewes investigating Ember Bay. Studies of Petrified Karka Eggs had indicated that the karka were living here since around Zhaitan's rise, over a century prior.

In 1331 AE, another group of karka were discovered in the Sandswept Isles. However, these are in few numbers and with no visible hive, with little reference from the local Olmakhan tribe. It is possible that their appearance there is either very recent, or brought by the Inquest of Rata Primus who imported various test subjects for experimentation with the Scarab Plague.

The karka are hermaphroditic with every member of the species capable of laying eggs. Each karka hive is ruled by an ancient with rank being determined in chronological order; the title of "karka queen" is actually a misnomer, simply reflecting the current eldest karka. The lower ranks of the hive are divided into different roles such as guards, food gatherers and egg layers. If the ruling ancient is destroyed the karka will lose their organization until a new ancient takes control.[3]