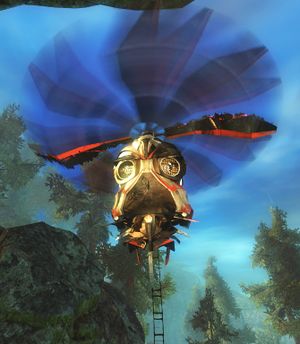 A Chopper seen in Drizzlewood Coast.

A chopper is a type of aircraft capable of transporting a small group of individuals through the air. The original prototype was designed by Kailani the Foolhardy, though the prototype never managed to maintain flight. When the Pact was formed, they obtained the plans for Kailani's chopper and improved upon it, making it a working flying vessel. Several were used throughout the Orr campaign with mixed success. The Pact continued to use them in their campaigns against Mordremoth and Kralkatorrik. After Zhaitan's defeat, the Iron Legion had obtained several choppers of their own to use in battle against the Flame Legion.