Veadh near the entrance. Once the first event finishes, the challenges cannot be further changed.

You can save time for the boss fight by applying swiftness or superspeed to the Kodan Claw NPC.

At the boss fight, there are overlapping AoEs and high melee damage. At health intervals of 70% and 35% the boss spawns additional enemies that need to be dealt with.

Defiance bars should be handled with normal crowd control skills.

Bug:
The use of Electromagical Pulse from Portable United Legions Waystation is discouraged as it is currently bugged and applies multiple boons to the boss when the defiance bar is instantly broken.[verification requested]

Because the damage dealt by the boss in melee range is extremely high, the player is advised to circle around Ryland to avoid most attacks without having to dodge. During the ice storm, the group can stand inside Ryland to dodge the ice shards while handling the defiance bar. 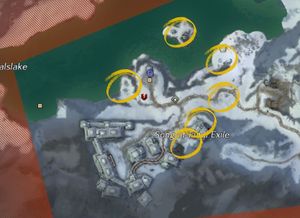 1 If supported by the Deldrimor Dwarves

2 If supported by the Ebon Vanguard

3 If supported by the norn

Upon entering the instance
<Character name>: Kas! Didn't expect to see you here.
Kasmeer Meade: Heard about Lake Doric on my way back from Ebonhawke. Figured I'd spread the word to potential allies.
Kodan Claw: Without her warning, more lives would have fallen to agents of Jormag.
Kodan Claw: Our sanctuary is open to all needing refuge. When the enemy comes, we'll be ready.

After finishing the first event
Kasmeer Meade: Is it me or did this feel like a distraction? Like, not the main event.
<Character name>: When Braham called, he said there was something else going on outside the kodan walls.
Kodan Claw: Safeguarding the settlement is my chief concern. I can be your guide, but I can't spare forces to aid your expedition.
Kasmeer Meade: We would never ask. How about the rest of you?

Speaking with the Kodan Claw
We must find the source of the spirit pain. Will you help us?

While traveling
Braham: Commander? Getting close to Song of Exile.[sic]
<Character name>: We'll meet you on the path, Braham. I brought some friends.
Kasmeer Meade: Same as Lake Doric?
<Character name>: No. Whole villages were frozen. And we fought Svanir shamans, not just warriors.

Meeting with Braham
Braham Eirsson: You made it. This way—the screaming's coming from further down the path.
Kasmeer Meade: Screaming? I don't hear anything.
Braham Eirsson: We're getting closer—pain's getting stronger...

Arriving at Svannijem Hold
<Character name>: Jormag's not making new Frozen from the dead. So what are their lackeys doing here?
Kasmeer Meade: I still don't hear anything.
<Character name>: Braham, you're not sensing destroyers again by any chance?
Braham Eirsson: No. No. That's pressure building in my ears. This is about the Spirits. I can't explain, but I can feel the difference.
Kodan Claw: You remind me of our Voices—those touched by Koda. Perhaps yours is a similar sensitivity.

When the Elite Svanir Brute appears
Braham Eirsson: Don't let them distract us!
Elite Svanir Brute: Norn of Prophecy—what do you really think you can do in the face of Jormag's power? You're nothing!

After defeating the Sons of Svanir
Owl Spirit: Braham.
Kasmeer Meade: I heard that.
Braham Eirsson: I know that—Owl?
Owl Spirit: I feel you near. Hurry. I cannot hold against Jormag's champion much longer.
Kasmeer Meade: Is there a village ahead?
Kodan Claw: There are no living out this way—only the memories of one who once was.

Encountering the final group before boss
Veteran Svanir Seer: Turn around, Eirsson. This doesn't concern you or your friends.
Braham Eirsson: Year I've had, got no time for this. Get out of the way.

Defeating the final group
Owl Spirit: (agonized scream)
Braham Eirsson: I didn't ask to be the Norn of damn Prophecy!
Kodan Claw: Voices have no say when a higher purpose calls. They allow the honor to mold them—just as you must.
Kasmeer Meade: Or maybe he's the Norn of Prophecy because of everything he's done. Spiritual direction—I get it. I've needed it.
Kasmeer Meade: But it's your choices and your actions that mattered, Braham. They're what made you who and what you are.

Arriving at the owl shrine
Owl Spirit: I exiled myself once—(agonized screech)—but I will go even further, if I must, to keep power from Jormag.
Ryland Steelcatcher: You're gonna help us, one way or another. Why not make it easier on yourself?
Owl Spirit: There is no ease in corruption.
Braham Eirsson: Ryland's channeling corrupted Spirit energy. He'll pull the life from her!
Ryland Steelcatcher: This one promised herself to Jormag once—ruse or not. And my dragon doesn't take promises lightly.
Kasmeer Meade: He's too strong! We're not going to be able to bring him down!
Braham Eirsson: We can't leave Owl like this. Jormag can't have her!
<Character name>: We don't have to kill him. Focus on the connection, Braham. Kas and I'll split his focus.

At 70% health
Braham Eirsson: What you're doing is cruel.
Ryland Steelcatcher: What I'm doing is necessary.

Ryland's defeat and exit
Owl Spirit: The Wild together can direct the fall. You are the harness, Norn of Prophecy. Tell them.
Braham Eirsson: (battle cry)
Ryland Steelcatcher: Just stop. You've released Owl. Take the win and go home.
Ryland Steelcatcher: We still have three more corrupted spirits we can leverage. Might take longer, but we'll get there.
Ryland Steelcatcher: Soon Jormag will be strong enough to face Primordus head on—and win. I'll see you in the world that comes after.