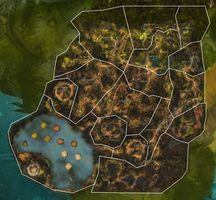 Dragon's Stand is an explorable zone located to the south of Tangled Depths. It is the deepest part of the Heart of Maguuma region. The Pact have set up a base on the outskirts, ready to engage in a zone-wide push into the Dragon's Domain. They face heavy resistance from swarms of Mordrem, elite Commanders, and the Mouth of Mordremoth, the Elder Dragon's physical form.

Playing through this map by doing the events and opening the Noxious Pods with Machetes is the primary way to obtain Leystone armor.

This map is all about its meta event, which starts every 2 hours. A map that is not doing its meta event will be mostly inactive. Players that wish to participate in this meta event, and/or completely discover all of this map, are advised to enter the map a few minutes before the meta event starts and check for groups in LFG. Several areas of the map are completely closed to players and only open by progressing the meta event.

Upon entering the Dragon's Stand, characters automatically discover all the Waypoints in the area. Most of them remain contested until the meta event has reached that stage.

Advancing on the Blighting Towers[edit]

There is a map-wide meta event involving killing Mordremoth's commanders and pushing the Mordrem back into his territory. If the meta event is not completed within the 2 hour time limit, Mordremoth blasts the entire map, killing and pushing everyone back to the Pact Base Camp on the north-east edge of the map, while also wiping all progress made by the events across its domain. Destroying all three Blighting Towers results in the timer being paused, allowing the final battle to take place without the pressure of a timer.

There are three lanes (north, middle and south), each with their own chain of events leading the Pact towards one of three Blighting Towers. The Pact must gather equipment and allied forces along the way, while destroying Mordrem Spitfires and claiming their locations as forward encampments. At the start of the meta event, and after taking each one of the forward camps, 2 events will occur per lane. By quickly clearing these events, the push can be much faster. Noxious Pods will also spawn at each base claimed, with additional pods spawned for each of the bonus events successfully cleared.

After claiming the first Spitfire in a lane, that lane's respective Legendary Mordrem Commander will spawn near their Gate to the Blighted Towers, and begin slowly marching towards the Pact convoy. These Legendary enemies will delay the escort and preparatory events alike, so engaging them in battle before they disrupt the push is crucial. These will respawn periodically.

All three lanes must reach the gates to begin the tower phase.

When the gates open, each lane will enter a room with a boss in the center. The boss is invincible unless all three Ley Line Harvesting pods are destroyed. After all pods are destroyed, the Veteran Mordrem Preservers which keep spawning around the room (90 seconds after the last one was defeated) need to be taken out continuously. If they are allowed to reach the center, they will heal the pods or spawn them. If a pod spawns, the boss becomes invincible again. If the boss is already defeated when a pod spawns, it is revived. All three Legendary Commanders must be dead simultaneously for map events to continue.

The usual tactic for this part of the meta event is to use two commanders and groups on each tower, one commander squad with 10 members, and the other commander squad with the rest. The larger squad runs continuously around the tower destroying the pods and defeating the three preservers (as they respawn), while the smaller squad engages the Legendary Mordrem Commander in the center. Speed Boost Mushrooms and Adrenal Mushrooms are available in the center area, greatly boosting the boss' defeat if used well.

After defeating the three commanders, the timer is stopped, and the Dragon's Domain becomes available to enter. The Updraft Use mastery is required to navigate this area; any further Gliding masteries will help the process. In particular, Ley Line Gliding makes navigation much easier as the islands are directly connected by these channels.

Soon afterwards, the Mouth of Mordremoth attacks. To achieve success, groups must split their numbers across each island. The Mouth or a section of its body will attack islands at random and expose itself to attacks. Using control effects when the breakbar is active is recommended as this will prevent Mordremoth from eating the island (if this happens, anticipate having to glide away). Soon after passing a 25% health mark, Mordremoth's commanders will appear on three of the islands, two of them (Diarmid and Hareth's islands) will be wrapped around by Mordremoth's body and if they are not killed within a timer, those two islands will be destroyed; Adryn gives buffs to the two other commanders, requiring his death as well.

The primary source of damage in this fight comes from the mortar shells, which can be taken from a fallen Pact chopper that spawns periodically. The majority of the characters present should collect these mortars and make their way to the Mouth of Mordremoth's head. A smaller group should attack the head directly, using control skills at a slow pace. This will keep the head from destroying the island, and buy as much time as possible for the mortars to arrive. After the initial mortar shell phase, a Legendary Mordrem Wyvern arrives to attack islands with its Flame Trail attack, leaving line AoEs across the island which deal a large amount of damage,

After these two simultaneous events, the following event cycle repeats until groups either succeed or fail the Dragon's Stand (80) meta event:

Upon defeating the Mouth of Mordremoth, a cinematic will play showing its death - after which one can glide into the updrafts to the reward chest atop the tree, where one can also find a Crystalline Ore Collector vendor.

After the Mouth of Mordremoth is defeated, special areas on the map will be opened containing Noxious Pods that are opened using Machetes. There are multiple "secret sections" like this that are open only on mapwide victory. Red arrows on the map will hint at where the secret passage to these "hidden" sections containing the pods are (the only source for Crystalline Ore in the game apart from personal story rewards). During this period, Rangers can find and charm 2 pets available only on this map, the Juvenile Tiger and Juvenile Electric Wyvern. The Juvenile Tiger can also be found in Draconis Mons, at Mariner Landing.