ArenaNet (colloquially ANet or Anet) is the development studio that makes Guild Wars and Guild Wars 2. They are located in Bellevue, Washington, USA, and their stated mission is to "create a state-of-the-art, interactive game network and design premier multiplayer online games for dedicated game players." The company is a wholly-owned subsidiary of the Korean company NCsoft, publishers of other MMORPGs such as Lineage 2, Blade & Soul and WildStar.

ArenaNet was founded in spring 2000 by Mike O'Brien, Patrick Wyatt and Jeff Strain. All three founders came from Blizzard Entertainment and were previously involved in the development of multiplayer online games such as Warcraft, Diablo, Starcraft, World of Warcraft and the Battle.net gaming network. The newly-formed business was originally called "Triforge", but was changed to "ArenaNet" shortly after; it was acquired in 2002 by NCsoft.

ArenaNet is currently focused on the development and support of Guild Wars 2, which was announced in 2007 and released in August 2012. Since the game's release, ArenaNet has continued to develop new content and features in the form of the Living World and Feature Packs and Releases, with content released for free to owners of the game. The studio announced Guild Wars 2's first paid expansion, Heart of Thorns, at PAX South in January 2015, and released the expansion on October 23, 2015. A second expansion titled Path of Fire was released on September 22, 2017, with a third, End of Dragons, was released on February 28, 2022. 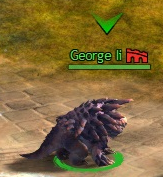 The Guild Wars 2 Support Team, some of which are also known as "game masters" or "GMs," are a subset of ArenaNet employees who are responsible for providing in-game customer service and enforcing the Guild Wars 2 Rules of Conduct.[2]

Over the years, ArenaNet has grown to ~350 employees. Two of the three founders left the company in 2008, but Mike O'Brien headed it as the president for over 19 years until he left in September 2019. A list of the ArenaNet team can be found in the game credits, though, of course, with time, there have been changes.