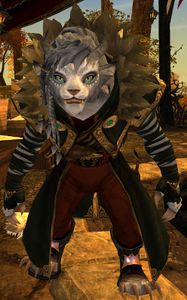 I was never some golden cub—nobody gave me anything. I had to EARN it!

Crecia Stoneglow, nicknamed Cre, is a member of the Stone Warband and a tribune in Imperator Bangar Ruinbringer's Blood Legion. She is Bangar's second-in-command and his shrewd Head of Security.[1] She excels at covert ops and is dedicated to her duty, using her cunning to her advantage. Crecia's Flame Legion heritage and innate skills as an elementalist might make some charr cagey, but her loyalty to her imperator and the legion that raised her is seemingly unshakeable.[2]

Crecia's sire was a high-ranking shaman in the Flame Legion. Her dam fled the legion so Crecia could be raised somewhere safe, and the pair eventually reached the Blood Legion Homelands where Imperator Bangar Ruinbringer took them in and put Crecia through the fahrar to raise her in the Blood Legion. However, Crecia never forgot where she came from and who she and her dam had left behind.[3]

As a cub, Crecia was one the striplings, whom the smallest cubs of her fahrar were called, and was bullied by stronger cubs. Eventually she and the other striplings banded together with the young Rytlock Brimstone as their leader and made the bullies stop by teaching them "a few lessons."[4] This band of striplings eventually formed the Stone Warband and was composed of about a dozen males and dozen females, with Crecia selecting the surname Stoneglow for herself.[5] While in the fahrar, Crecia and Rytlock often spotted ice elementals coming down from Shiverpeaks Pass.[6]

Some time after Crecia and Rytlock had graduated from the fahrar, Bangar ordered them to infiltrate the Flame Legion and sabotage it from the inside. Using her sex to her advantage, Crecia successfully poisoned food, stole plans and swapped orders under the noses of the Flame Legion who did not expect a female beneath their notice to be a spy for the Blood Legion.

While on the mission, Crecia and Rytlock learned that the garrison they were in had received Prince Rurik's lost sword Sohothin which Flame Legion agents had discovered on the Ring of Fire islands and were intending to deliver to Imperator Gaheron Baelfire. Crecia objected to Rytlock's plan to steal the sword as it would compromise their mission and put them both in danger; despite her warnings, however, Rytlock killed the guards protecting the sword and begged her to leave with him. Intent on keeping up her cover, Crecia stabbed Rytlock in the leg and sounded an alarm to make herself look less suspicious to the Flame Legion who chased after Rytlock.[7] Crecia successfully stayed undercover with the Flame Legion for years after Rytlock's departure. Around this time, she got close to Gaheron as part of her cover; once Rytlock learned about it, he was not pleased.[8]

Crecia eventually ended her mission and returned to the Blood Legion with the intel she had gathered. She told Bangar that she had only stabbed Rytlock in the leg during his escape from the garrison to make it "look good" in order to ensure the continuation of her mission. She was eventually promoted as the Blood Imperator's second-in-command, becoming his shrewd head of security as a tribune.[1] Many years later, Rytlock still thought about Crecia fondly.[7]

At some point, Crecia gave birth to Ryland Steelcatcher, who was sired by Rytlock. As was common among charr, Crecia cared for Ryland until the time of his weaning, after which she gave him to the fahrar to be raised in Blood Legion ways. Rytlock rarely visited them, leaving Crecia to watch over their son's progress in the legion.

As the Flame Legion's power gradually diminished, Crecia attempted to persuade Bangar to sign a truce with the fracturing legion. Although the Blood Imperator dismissed her ideas for many years, he eventually grew to realize how the truce might strengthen his own power base, and he let Crecia reach out to an atoning Flame Legion splinter group led by Efram Greetsglory.

In 1332 AE, preparations were made for the All-Legion Rally in Grothmar Valley to not only celebrate the Elder Dragon Kralkatorrik's demise but to bring the four legions together so Bangar could reach out to all of them for his political purposes. The Blood Imperator took credit for the truce in the letters sent to various racial representatives, while Crecia handled the logistics of the political summit with visitors from many corners of Tyria.[3][9]

Crecia was present when Rytlock was summoned to meet Bangar. As second in command, she oversaw the All-Legion festival and was in charge of security. When word of Renegade movement threatened to interfere, she joined Rytlock and the Pact Commander as they approached Bangar with their concerns. She watched on in silence as Bangar pointed out that he considered Rytlock a failure and had taken better care of Ryland as a father figure than Rytlock himself had, which provoked Rytlock into attacking him and led to a vicious brawl between the two male charr. She chased Bangar and Ryland out into the Shiverpeaks during the storm, but even after witnessing Bangar's speech and Braham's stolen bow, she remained loyal to her Imperator and was certain that he had a good reason to be doing whatever he was doing. 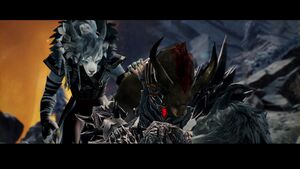 Abilities (since Behind Enemy Lines)

Abilities (during One Charr, One Dragon, One Champion)

In Umbral Grotto
I know it's rough out there, Commander. But we just need to keep pushing against Bangar's forces. I know we'll make it. We have to.

I'll keep at it. Hang in there.

In Legions' Alcove
Any help you can give us would be appreciated, Commander.

Consider it given. You doing all right?

There's a fair bit to manage, but we're holding things together. We'll be ready to move when the time comes.

See also: Bangar Ruinbringer#During the Confer with Bangar achievement
The Legions are still fractured, but thanks to your help we've held together. We'll repay that debt, Commander.

He's made his choices. I only hope he's ready to accept the consequences.