Please afford me the respect my throne merits. I do know sarcasm when I hear it.

Her Imperial Majesty Ihn, Empress regnant of the Empire of the Dragon, is a direct descendant of the Canthan imperial family founded by the first Canthan emperor Kaineng Tah. She is also the half-sister of Yu Joon. Ihn cares a lot about the Canthan people and wants the best for them.[1]

Ihn was born to the Imperial Family of the Empire of the Dragon as the daughter of Emperor Taejeong.[2] Following her father's passing, she became the second empress regnant of Cantha after her great-grandmother Empress Haebaragi.[3] Ihn would soften some of her father's policies, choosing a more openminded and diplomatic approach to solving conflicts as she understood that change was inevitable to ensure Cantha's progress and welfare in the future.[4]

Ihn also learned that the innovator and head of Xunlai Jade, Yu Joon, was her half-sister from the emperor's extramarital affair with the potter and jade trader Yu Dal-Rae.[5] Despite some tension between the half-sisters as Joon's influence and power began growing due to her company's amassed wealth, Ihn and Joon appeared to get along thanks to the innovations Joon had provided to Canthans with her jade tech.[2] However, Ihn would sometimes remind Joon to show her proper courtly respect as empress.[6] 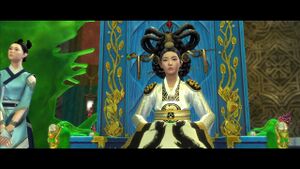 Ihn on her throne with Navan about to receive the Krytan delegation.

In 1845 CC (1335 AE), the Aetherblades suddenly appeared over Seitung Province to spread chaos with their air raids, followed by the arrival of the Elder Dragon Aurene and two Tyrian trespassers—the asura Gorrik and the Pact Commander—who had washed ashore amidst Aetherblade airship wreckage. While the pair were detained for questioning in Seitung Prison, the Imperial Court began considering how to respond to the incident. Realizing the opportunity as a pivotal time for the empire, Joon argued in favor of opening Cantha's borders to foreign visitors, eventually persuading Ihn and the court to her side.[9]

Ihn sent a message to Kryta informing the northern kingdom about Cantha reopening its borders and inviting Kryta to reestablish diplomatic relations. The empress also used the opportunity to inquire the Krytan throne about foreign airships appearing in Canthan skies as well as the arrival of a dragon and two foreigners on Seitung's shores. Queen Jennah sent a delegation headed by Ambassador Kasmeer Meade to enter negotiations with the Imperial Court and assure them that Kryta had nothing to do with the Aetherblade invasion. The delegation flew an airship to Cantha, getting past the Unchained Risen armada patrolling the Sea of Sorrows by cloaking themselves with Kasmeer's mesmer spell.[10]

Kasmeer was eventually invited to meet Ihn in the Royal Court and was accompanied by the asuran researcher Taimi and the Commander. The trio witnessed a heated exchange between Joon and Minister Li Ha-Eung about Xunlai Jade's latest jade mechs and if they were safe to use in front of the imperial throne. Ihn took her half-sister's side in the argument, reminding Li that Joon had been pivotal for Cantha's progress and had earned the empress's trust. However, she also made sure to remind Joon of her place in the hierarchy.

Moving her attention to the delegates, Ihn began with courtly etiquette wishing Queen Jennah well although she was also quick to point out the problem the Aetherblades posed to Cantha while wondering if Kryta was involved in the incident in any way. Minister Li interrupted the exchange, trying to sway the empress to see his point of view that Tyrians could not be trusted and had ulterior motives for visiting Cantha. Ihn took Joon's suggestion to have Joon and Li continue their debate in an adjacent chamber in private so the empress's conversation with the delegates could proceed without further interruptions.

Kasmeer formally introduced one of the former prisoners of Seitung in her company as the Commander, making Ihn inquire more about the title until the imperial advisor Navan informed the empress of the Commander's relation to the Pact which Ihn had heard about. Ihn accepted Kasmeer's proposal that the Tyrian delegation would repay the Imperial Court's mercy by handling the Aetherblade threat for them with the Ministry of Security's help, and told the delegates to speak to Minister Li about the details of this collaboration. Having said her piece, Ihn concluded the meeting and retired to her chamber with Navan.

Following the border reopening and the death of Soo-Won, Empress Ihn began planning her first trip abroad to visit Queen Jennah in Divinity's Reach in Kryta. According to Mi-Rae's holonews report, Ihn would be accompanied by Krytan Ambassador Kasmeer Meade and Acting Minister of Security Cho Min who had temporarily taken the position of the deposed and imprisoned Minister Li who had been found guilty of high treason. After learning how former Aetherblade leader Mai Trin had sacrificed her life to save New Kaineng from a Void outbreak in the terrorist attack at the Yong Reactor, Ihn bestowed her the posthumous title Hero of Kaineng for her exceptional display of bravery.[11]