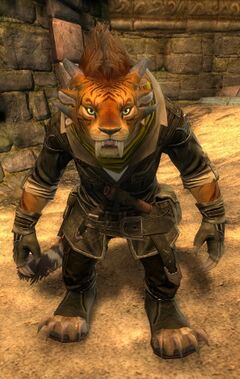 Spoiler alert: The following text contains spoilers relating to Ghosts of Ascalon.
Crusader Ember Doomforge is an Ash Legion charr. She was remitted by Imperator Swordshadow under the command of her granddame, General Almorra Soulkeeper of the Vigil, and has since then been working for the order. Her focus in the Vigil is to ensure that the human-charr conflict stays a thing of the past. As the granddaughter of General Soulkeeper, she is also the apparent niece of Ajax Anvilburn.

In 1324 AE, Ember was ordered by General Soulkeeper to accompany Dougal Keane, Riona Grady, Killeen, and Gullik Oddsson to Ascalon City to retrieve the Claw of the Khan-Ur, and to act as their guide while in the charr-controlled Ascalon. Their mission was successful, and Doomforge began working with the Vigil at Summit Peak to keep the truce negotiations on track.

Following the destruction of the Pact fleet in the Heart of Maguuma in 1328 AE, Ember joined Dougal Keane in the newly founded Guild Initiative and was stationed in Lion's Arch.

Hey, there. Welcome to the Guild Initiative Headquarters. We help guilds fight the Elder Dragons.

Yeah. The Initiative is a collaboration of the Tyrian Explorer's Society and the various nations of Tyria. We support guilds.

Support them in what?

Primarily, to help them fight the Elder Dragons. But more generally, to help make Tyria a better place. More information is available to guild members, inside.

Heh. Yeah. I'm Ember Doomforge. Helped out with that whole Claw of the Khan-Ur thing in Ascalon.

Sure. What else can I do for you?

Guild Initiative? (same as above)

You seem familiar. (same as above)

Actually, that's it. Thank you.

At Warrior's Crown
I'd rather be cleaving a dragon minion to pieces, but I need to see this through to the end. Since I'm partially responsible for this gathering, I'm obligated to sit through it.

How are you responsible for this?

I was part of the expedition who ventured into the depth of Ascalon ruins to retrieve the Claw of Khan-Ur. Without it, the humans wouldn't have gotten the charr to the table.

Why do you support peace with the humans?

The brass says peace will free us up to fight the Flame Legion, but I have seen and killed things that put us and the humans at risk of extinction. We've got dragons to fight—together.

Hopefully it won't take too long.

Bug:
During the personal story mission Minister's Defense, she has a different appearance.