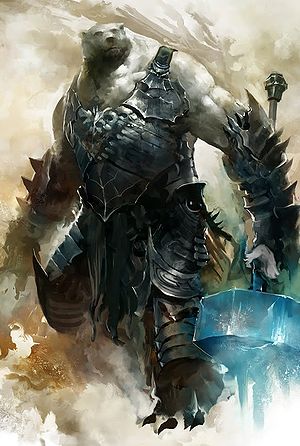 No race weaves the thread of life. We are all strands in it, seeds upon the earth, inheritors of nature's balance.

The kodan are a race of intelligent polar bear-like beings from the distant northern lands and seas. They are a highly spiritual race that for centuries have lived in cities built upon, and carved into, icebergs in the arctic seas known as Sanctuaries. Their society is divided into tribes, each one having their own iceberg and leaders.

After the Elder Ice Dragon Jormag awoke, the kodan Sanctuaries were scattered in all directions, if not capsized by the dragon.

The kodan are ten feet tall and are bipedal. They resemble polar bears and are often seen adorned in armor and red cloth. The lifespan of the kodan is not fully known, but some can live for centuries. There is considerable debate among scholars and kodan Voices over whether the kodan are distant cousins of the norn.

The kodan live in close communities upon their Sanctuaries, acting in concert and living in peace. The kodan are not without disputes and disagreements, but they consider themselves "above" most interpersonal conflict. To them, balance is more important than an individual's needs and the will of their god, Koda, supersedes any single kodan's wishes. Each member of the tribe contributes and works to maintain peace, encouraging the sharing of resources, and provide support for others within the Sanctuary.

Their Sanctuaries both act as shelters and as spiritual havens. Within the core of the Sanctuaries lie shrines to Koda and the Voice of the tribe and iceberg city. The kodan are a highly religious race, with their beliefs of balance and Koda at the core of their culture and society.

Kodan young are said to be weak and easily susceptible to outside influence. As such, they are heavily guarded and rarely—if ever—seen by outsiders. 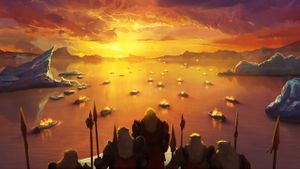 The kodan believe that their god, Koda, is the creator of the world, and teaches the importance of balance. For example, each individual's actions must be in balance with nature. However, this does not mean that they are pacifists; they view hunting and killing as a natural order of life, as long as it is done in order to serve the balance. The Voice of each sanctuary communicates with Koda directly, linking their mind to the Mists in order to hear his word. This, in turn, is interpreted by each Sanctuary's Claw. The constant exposure of the Voice's mind to the Mists can, in rare cases, cause the Rage of Koda. The Voice is tended to by shamans and before death passes on his role to one of his caretakers.

The kodan also believe that everyone will always be reborn as their own race until they reach a higher stage of enlightenment, after which they reincarnate a step up in the spiritual ladder. Of course, in their view they have reached the top of this ladder and are therefore responsible for maintaining balance, and they are not afraid to use force to do so.

Although the kodan will not hold an individual responsible for the actions of their race, they do tend to judge races as a whole, often based upon the actions of a few of their members. When they meet a new race, the kodan will take time to evaluate the race and determine how best to bring them into balance—this is how they treat the norn. However, for races that are openly hostile, such as the dredge, the kodan will make their judgement quickly and violently.[1]

The kodan are divided into tribes, with each tribe having two equally important leaders: the Voice and the Claw. The Voice is the spiritual leader of a tribe, passing on messages of Koda and giving guidance to the Claw. They are capable of sensing the balance of the Sanctuary and the world around it. The Claw is the physical leader of the tribe, protecting the Sanctuary and the Voice, and turns the Voice's words into actions. Outside a small group of shamans, who tend to the Voice's needs to keep him alive, only the Claw may speak to the Voice. The Claw also leads the hunters and warriors of the Sanctuary. Neither of the two leaders has the power to overturn the others' decisions.

The Claw and Voice are often chosen at the same time, and end their rule together. If one dies, it is tradition for the other to retire. Between these two kodan, the Sanctuary of the tribe is very organized.

The kodan choose their own names, basing it off of their personality, past, actions, occupations, or something that they find suitable. In essence, they chose a name which they feel describes them best. As such, their names are usually descriptions or nouns of some form. For example, Still Waters chose his name to remind himself of a past event and Farthest Shore took that name because he felt distant from his people. Kodan will also change their names to suit their evolving personalities or changed circumstances, for example, Watchful Moon changed his name from "Laughs at the Dawn" after his wife died. It is unknown how newborn kodan names are treated.

According to the histories of the kodan, the world was created long ago by Koda, and with it, the spirits of the world. Over time, these spirits began to take form, becoming the beasts of the world we see today. One day, the bear stood up and took notice of the restlessness and chaos, of the endless cycles of creation and destruction. And Koda took notice, and offered the bear guardianship of the world, tasking them with guiding the lesser spirits to enlightenment. Those that accepted his offer, became the kodan.

The kodan are one of the few races that lived during the time of the previous Elder Dragon awakening.[2] Before then, the kodan are said to have spread across the land, bringing balance to the spirits they encountered wherever they went, and were hindered only by the seas.[3] When the Elder Dragons awoke, they fled to the shores of the northern seas and waited out when the Dragonstorm occurred. Over the generations they waited, eventually a tribe of kodan, led by a Claw without a Voice, traveled south to find food, and never returned. It is speculated by scholars and Voices that the norn are descended from this tribe, and those Voices therefore view the norn as spiritual failures who are regressing to a more primal state. They warn that if the norn do not seek balance, they may soon follow the fate of the dwarves. Despite this, the two races are not hostile to one another.[1]

When the dragonstorm finally passed, the kodan found that great chunks of the sea had frozen as a result of the storm, forming icebergs. Believing them to be gifts from Koda, the kodan settled on them, turning the icebergs into floating cities.

When Jormag awoke in 1165 AE, the kodan's sanctuaries were destroyed or scattered in all directions. A small number of them fled south into the inland sea of the Far Shiverpeaks created by the Elder Ice Dragon and reached as far south as Snowden Drifts. Now, the kodan strive to bring the world back into balance, though they question how to go about it as they remain unsure whether the Elder Dragons are here to bring or prevent balance. 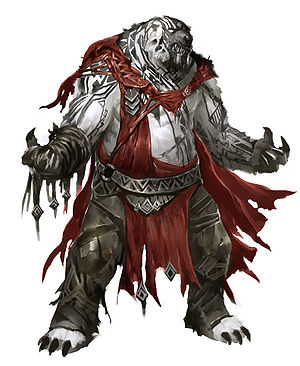